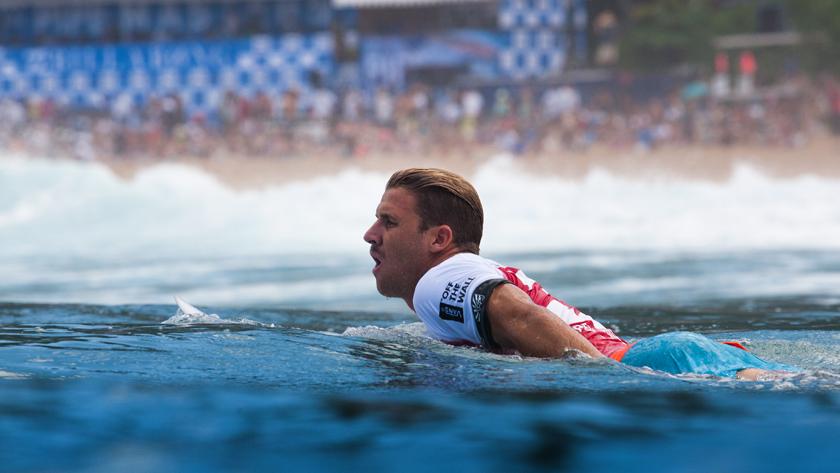 SUNSET BEACH, Oahu/Hawaii (Friday, December 6, 2013) – With the 2013 ASP Qualification Series done and dusted, Australia’s Mitch Crews, 23, has emerged as the newest Gold Coast standout to join the elite ranks for 2014.

Crews’ rampage on the 2013 ASP Qualifying Series began with a victory at the 4-Star Quiksilver Open Japan and was followed with a run of incredible consistency in major QS events spanning the globe. With Crews’ qualification status secured for next year’s ASP World Championship Tour (WCT), the ASP caught up with the Australian talent to reflect on the road that brought him to the big leagues.

There is such a deep talent pool on the Goldie and there must have been plenty of people to look up to, but who inspired you the most growing up and who were your biggest influences?
Joel (Parkinson), Mick (Fanning) and Dean Morrison. Watching them surf on tour when I was younger I used to get so pumped when they would win events. I used to think they were the coolest guys because they were from the Gold Coast and I would see them surfing around home. I always wanted to be like those guys. To have two guys from your home town with World Titles that you can call your mate is pretty awesome too.

We’ve seen lots of surfers go on to qualify after a successful Pro Junior career, rather than trying to qualify at a younger age. Do you feel that you’re more ready now to compete on the CT than you would have been if you were focusing on qualifying a few years ago?
Definitely. With age comes experience and the more experience means the wiser decisions you make in heats. When I was on the junior series, I would just catch a bunch of waves all naive and unaware of the heat situations. Now I’m more selective and attentive, so I feel as though I’m way more prepared to face tough heats on tour now as to back then.

It’s a long year on the QS but you were able to remain consistent. How did you plan for this season and remain focused?
I just found that routine really helped me. I treated every heat I surfed like it was a normal routine. I have 30 minutes before I surf my heat, focus on the waves, do my warm up routine, listen to music, grab my board and progress. I just simplified it and didn’t put any pressure on myself, I kind of treated it as though it was work. I was just going and doing the job and every heat blended into each other and the year just felt like one big contest and I was just making heats.

How can you describe your season overall? Did you feel like going in to this season, it was your goal to qualify? Was there any point in the year where you thought you had a turning point in your momentum or did you really just feel in rhythm from start to finish?
Well, I always wanted to qualify, but I took it one event at a time. I just set myself realistic, achievable goals that I thought I was capable of achieving to my ability. It wasn’t always winning, it would be like, get to the round of 16 and the job is done. In Japan for the 4-Star, my goal I set was to win, and when I won I felt that was a huge momentum changer and added huge amount of confidence. I basically thought it was really easy and straight forward from there and I just set my goals and ticked the boxes.

What are you most looking forward to for the 2014 WCT?
Being able to surf the amazing waves on tour. It’s such a different ball game to the QS. You’re surfing the best waves in the world as opposed to grovelling average beach breaks with four guys. I’m excited to be competing along the best guys in the world.