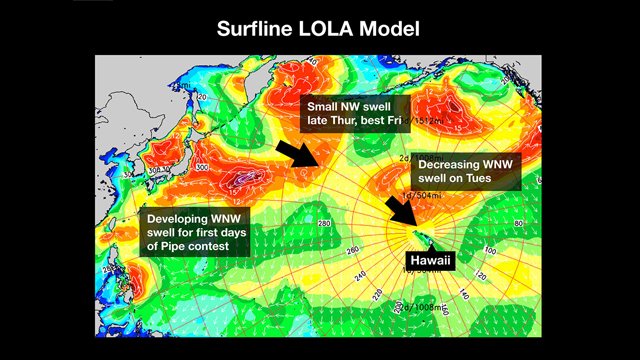 BRIEF OVERVIEW:  The current WNW swell drops on Tuesday, with small leftovers Wednesday and into Thursday morning. We’ll see a very modest pick up of new WNW and North swell Thursday afternoon. We continue to monitor a good size swell for the first couple days of the Pipe waiting period.

The current, shorter to mid period WNW swell will be dropping off on Tuesday. The surf will be strongest in the morning with waves running from head high to a couple feet overhead, while the very largest waves of the morning are several feet+ overhead. Smaller, fading leftovers take over Wednesday and into Thursday morning.

We will see a small, new bump of new WNW and Northswells filling in Thursday afternoon/evening but that won’t be significantly bigger than head high+ and shows primarily for the late afternoon and evening hours before peaking on Friday.

LONGER RANGE FORECAST– We continue to monitor a promising looking swell for Pipe during the first couple days of the waiting period (Dec 8-10) on the long range charts/models. The storms creating these swells are a few days from actually happening, so look for further details later this week once they pull together. At this point, building swell will commence through the day on Saturday, a peak on Sunday and then easing surf through the following Wednesday. Conditions look generally favorable at this time as well.

Stay tuned, we’ll be able to fine tune the details on the size and the arrival time as we see the storms develop over the next few days.

Another front will develop to the northwest of Kauai on Tuesday, with high pressure centered between the Hawaiian Islands and the mainland. As a result, light SE winds develop for Tuesday with a variable northerly sea breeze in the afternoon. Easterly trades gradually rebuild for the second half of the week and continue into the weekend, with partly cloudy skies and only a few passing showers. Stay tuned.

Watch the Mechanics of Sunset by Surfline