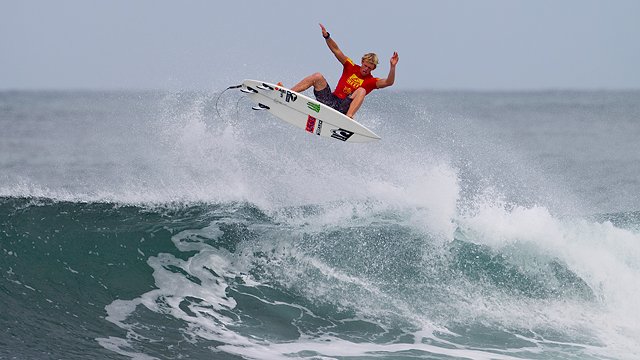 HONOLULU - (Saturday, November 17, 2012) -- The big guns entered the draw at the REEF Hawaiian Pro today and the battle for the 30th anniversary Vans Triple Crown of Surfing title began in earnest. Super clean and contestable 4-foot surf may have been smaller than yesterday's offering, but it opened up the door for the full spectrum of maneuvers from tube rides to aerials. With four surfers in the water at any given time, the judges had their work cut out for them: A total of 1,053 individual rides were scored today.

Slater drew the biggest crowd, paired up against the legendary Hawaiian Sunny Garcia, Alex Smith (HAW), and Jesse Mendes (BRZ). Garcia offered up a spirited contest from the outset, locking in a clean tube-ride that shot a message to long-time rival Slater that the game was on. Slater's trump card was his aerials, while Garcia focused his energy on securing the biggest waves that better suited his power gouging approach.

"He's just as grumpy as ever, I love it," said Slater, on Sunny. "He has to catch the first wave and paddles right back around you. You've got to try to get a score and put a little pressure on him... but you know Sunny, he's stubborn, he's got this mentality where you know he's going to play the heat his way, and you can't change that. So you have to do your own thing."

Garcia was doing double time again today, switching between the main event and the final heat of the exhibition REEF Clash of the Legends against Kaipo Jaquias (HAW), Mark Occhilupo (AUS), and Tom Curren (USA). Garcia eventually won the Clash for a bonus $10,000.

Clash of the Legends line up. Photo: ASP/Kirstin

Despite the nostalgic glory of winning the Legends, it's safe to say that Garcia's real focus today was on proving his place in the lineup against Slater. Including today, the pair have faced off 16 times during their careers - Slater holding the upper hand with 11 wins. Satisfied with his performance, Garcia was full of praise for Slater.

"Kelly is always in it to win it," said Garcia. "That guy has the deepest desire to win events of anybody I've ever known, so it's going to take a lot to beat him, and I'm up to it.

"Kelly's the greatest of all time. Even I have a hard time saying it, but I'll say it: 'he's the best surfer ever', and I'm very proud of him, the way he's carried surfing for so long.  He's done a great job being an ambassador for surfing and I'm just grateful to be able to call him a friend."

Gabriel Medina (BRZ) surfed the last heat of the round of 96 today and flew through a dizzying display of aerials to post an event-high heat score of 17 points out of a possible 20.

"Hopefully I can do good in the Triple Crown, that's what I'm looking for," said Medina. "This is my first time doing it serious.  Last year I did Triple Crown and I wasn't too serious but now I'm trying to get focused and I really want to get this.

"I prefer conditions like this, lefts and kind of windy so I can do big airs. I just try to go big and get high scores... and I think it worked."

Inspired by Dane Reynolds' layback hack of yesterday - a single move that reverberated through cyber-space - John John Florence arrived for his opening heat today. He went on to post the top single wave score of the round - 9.4 - with an outrageous air that rockets him into contention for the Hawaii Air Show award: 250,000 Hawaiian Airlines miles for the best aerial of the Triple Crown.

"I kept hearing about Dane's turn and had to watch (the video)," said Florence. "It was just crazy. It was like the craziest turn I've ever seen out here!

"This event is really exciting. It's fun, it's a bit different than the (elite tour events). It's harder. You have a lot of guys groveling for each wave and it's definitely fun."

The first two heats of the Round of 32 were held before day's end and resulted in the elimination of Nat Young (Santa Cruz, CA), Dege O'Connell, Aritz Aranburu (EUK) and Alain Riou (PYF).

Organizers will reassess the conditions at first light tomorrow morning for a possible final day of action.