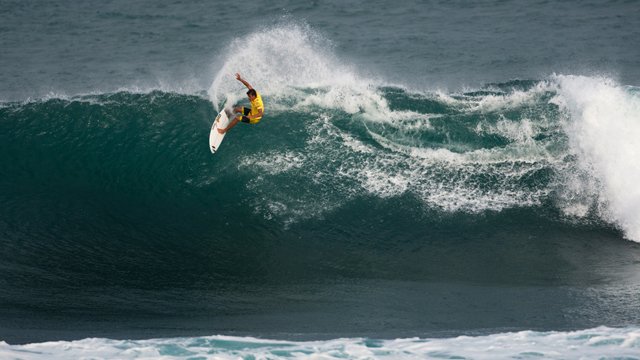 Sunset Favors Experience at the Vans World Cup of Surfing

HONOLULU - (Tuesday, November 27, 2012) -- The Vans World Cup of Surfing - the second jewel of the 30th anniversary Vans Triple Crown of Surfing hydrated by vitaminwater - hit the waves at Sunset Beach today in a new double-overhead swell. At this size, Sunset can be even more challenging than on the giant, life-threatening days, and a 30-minute heat can dissolve faster than salt in water.

Early casualties were claimed by the shifty lineup; surfers who found themselves short on a back-up ride and out of time: Dane Reynolds (USA); Aritz Aranburu (EUK); and Stu Kennedy (AUS) were among them.

It's the kind of day that lends itself to local knowledge and a long history with the break. Among those who fit that bill were Sunset local Pancho Sullivan - the day's high scorer with 15.5 points; Australians Tom Whitaker and Nathan Hedge; and Maui's Ian Walsh and Ian Gentil.

"You've got to approach Sunset everyday for what it is," says Ian Walsh, 29. "You can't really plan too much ahead... even right before your heat you've got to make an adjustment, adapt to every little thing, you can't really premeditate everything."

Despite having dashed his hopes at a Triple Crown win back at the REEF Hawaiian Pro, Walsh says he's here to win and to keep climbing the ladder that will hopefully lead to a Vans Triple Crown title one day.

"The Triple Crown is obviously one of the goals that are looming up here above me that I've been looking at for years and I had kind of a rough start at Haleiwa, but I think it's still something that I have a lot of respect for. The winner that comes out ahead on all three of these events is someone we all know deserves it."

Nathan Hedge (AUS), on a comeback and looking for valuable seed points for 2013, reveled in the conditions today.

"I really love Sunset Beach, it's always the last event on the (qualifying tour) so it's a lot of high drama and emotions and ratings points at stake so it always creates for an epic environment.

"I've been coming here for 20 years, so I think that will help. I've put a lot of time in out here and I have had heats where I've needed to get through to qualify but I'm not in that sort of situation (now), so I can just really relax and enjoy the experience... just go for it."

The last word on the day came from Pancho Sullivan, who has powered to five wins here at his home break of Sunset Beach, but won't go home happy until he can put a Vans World Cup on his mantlepiece. This is the one win that has eluded him for more than a decade.

"'I absolutely love this wave it's got so many looks - from 2 feet to 15 feet it's so much fun," said Sullivan. " It's a high performance wave.  You can really push your surfing and I try to attack it like you would a small wave even in the bigger 8-10 foot surf.  It's home, I grew up, started surfing the little inside wave shores and eventually graduated out to the point and it's a wave that I think you just have to put a lot of time into learning the different lineups depending on the direction and size."

When competition resumes it will be with the Round of 96. Today's swell is definitely on the decline and it may be a day or two before the event moves ahead. When it does, the talent will include Tanner & Dane Gudauskas (USA); Jamie O'Brien (HAW); Gabe Kling (USA); Jack Freestone (AUS); Mark Occhilupo (AUS); Nat Young (USA); and Joan Duru (FRA).