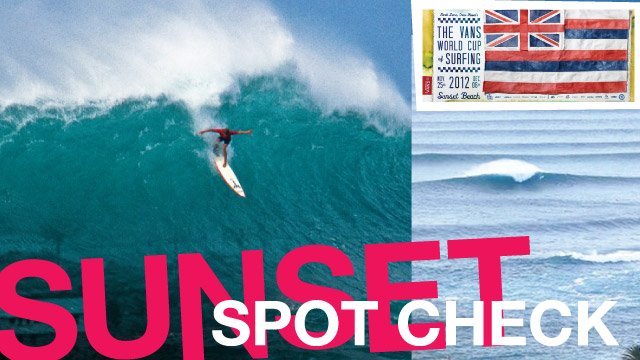 “Sunset is one of my most favorite events. I love the football field size and the feel of the wave. I love how hard it is to ride. It’s such a challenge. It’s a wave that you feel like you don’t really ride it, it rides you, like it’s open-ocean surfing. You can really see who can surf a big board, who can get themselves around the lineup and into the right spot. And picking the right wave at Sunset is the hardest thing. When you do get on them, they’re unreal, but if you get on the wrong one it can take 10 minutes to get back out and the heat can be gone.” —Joel Parkinson

The second stop in the Vans Triple Crown of Surfing, the Vans World Cup of Surfing at Sunset Beach, is a test of a surfer’s strength, stamina, courage, skill and vast ocean knowledge. Sunset has long been regarded as the ultimate competitive test, being the most challenging wave in the world. The long right walls break at the top of Sunset Point and make their way into the cove toward Sunset’s infamous West Bowl, where the bottom of the wave drops out and the Pacific Ocean seems to converge and heave over the reef in wide, gaping and warping barrels. If waves are a surfer’s canvas, then Sunset is a full-scale high-rise mural.

Without fail, year after year, Sunset showcases the sheer force of Mother Nature, drawing in the Pacific Ocean’s energy from more than 1,000 miles away. Paddling the heftiest of their surfboard quiver, competitors must commit to literal mountains of water as much as 30 feet high and 50 feet thick, covering a distance of more than 100 yards. The task is no small feat and gives status to those willing to put themselves in the right place at the right time to ride a monster. Covering such a large, fluid area, Sunset is notorious for closeout sets that wash through the contest area and pummel competitors caught inside. It snaps surfboards like toothpicks while delivering punishing wipeouts of severe consequence. When a surfer paddles out at Sunset for his heat, he is not competing against three other surfers, but against the very ocean itself.

Sunset’s long, racing walls appeal to surfers who can lay down smooth, powerful arcs and gouges in the most critical part of the wave. It also rewards those who can successfully negotiate the West Bowl barrel. The new generation of young surfers is drawing on decades of bravado and power surfing and is raising the bar at Sunset to set a new stage for progressive surfing.