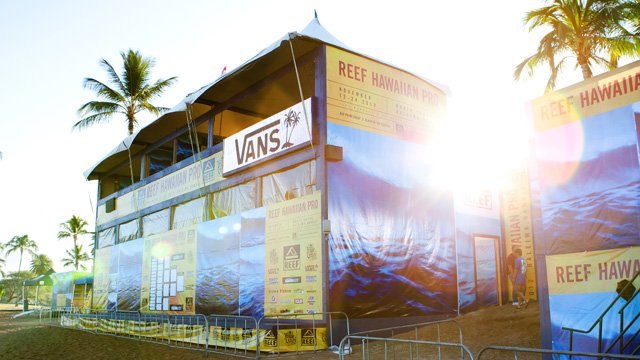 HONOLULU - (Monday, November 12, 2012) -- The $1million Vans Triple Crown of Surfinghydrated by vitaminwater opted for a lay day today at the Reef Hawaiian Pro. The first jewel of the Series will be held at Haleiwa Ali'i Beach Park on the four best days of surf during the period of November 12-24. Waves today are inconsistent and barely head high. Surfline.com, official forecaster for the Vans Triple Crown, expects a new NW swell to fill in on Thursday for a possible Thursday morning start.

As part of the Reef Hawaiian Pro, Reef will partner up with "Waste to Waves" for a Foam Drive during the event. They will also present the Reef "Clash of the Legends" featuring Tom Curren, Mark Occhilupo, Kaipo Jaquias, and Sunny Garcia.

Other events coming up during the first week of the Vans Triple Crown include: