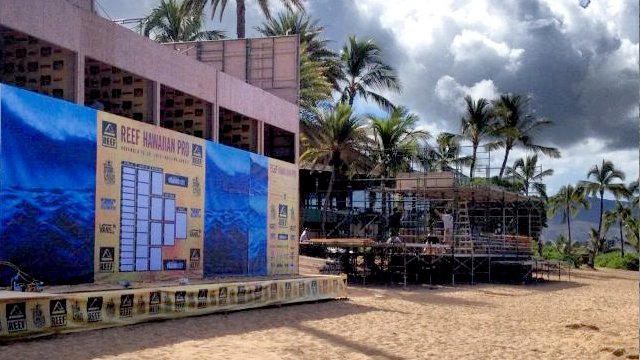 HONOLULU - (Thursday, November 8, 2012) -- The $1million Vans Triple Crown of Surfing hydrated by vitaminwater is making final preparations for the official start next Monday, November 12. The first jewel of the Vans Triple Crown is the Reef Hawaiian Pro, to be held at Haleiwa Ali'i Beach Park on the four best days of surf during the period of November 12-24.

"There's a good chance that we will take advantage of a small swell on offer right off the bat on Monday so that we can get the first round under our belt," said Vans Triple Crown Executive Director Randy Rarick, "as better conditions are expected later next week and towards the end of the Reef Hawaiian Pro period."

Daily swell forecast updates will be provided to event organizers starting tomorrow by Surfline.com, official forecaster for the Vans Triple Crown of Surfing.

"Haleiwa is a high performance wave regardless of its size and it's the perfect stage for launching our 2012 Hawaiian Air Show that will showcase all of the technical and progressive aerial maneuvers of leading athletes like John Florence (Hawaii), Dane Reynolds (California), Gabriel Medina (Brazil), Josh Kerr (Australia), and last year's Air Show winner Nat Young (California)," said Rarick.

The Hawaiian Air Show offers 250,000 Hawaiian Airlines Miles to the surfer who executes the most progressive aerial maneuver during the 6 weeks of the Vans Triple Crown of Surfing.

This winter we celebrate the 30th anniversary of the Vans Triple Crown with a record prize purse and a $100,000 bonus to the series champion. In addition to individual event and overall series champions, the final event of the Series - the Pipe Masters, will determine the 2012 ASP World Champion.

As part of the Reef Hawaiian Pro, Reef will partner up with "Waste to Waves" for a Foam Drive during the event. They will also present the Reef "Clash of the Legends" featuring Tom Curren, Mark Occhilupo, Sunny Garcia, and Kaipo Jaquias.

Other events coming up during the first week of the Vans Triple Crown include: