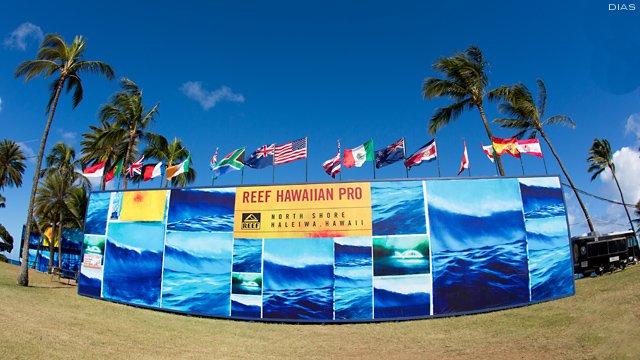 HONOLULU - (Wednesday, November 14, 2012) -- The REEF Hawaiian Pro at Haleiwa Ali'i Beach Park - the first jewel of the $1million Vans Triple Crown of Surfing hydrated by
vitaminwater - is ready for an 8am start tomorrow morning, following an early Hawaiian beach blessing.

Surfline.com forecasts an increase in swell for tomorrow through Saturday, peaking Friday in the double-overhead range.

The Clash of the Legends stars have inspired generations since dominating surfing's limelight back in the '80s & '90s.... Sunny and Occy are still active competitors and will in fact be doing double time this week as both Legends and challengers in the main event.

Watch the new REEF Clash of the Legends video

TODAY'S SPECIAL EVENT FOR THOSE ON THE NORTH SHORE:
Talk Story & Movies at Surfer, The Bar: John Florence & the Gudauskas Bros. present Get-N Classic movies 1 & 2, 8pm intro followed by movies.
Those not on the North Shore can watch LIVE here at 8pm Hawaii time.