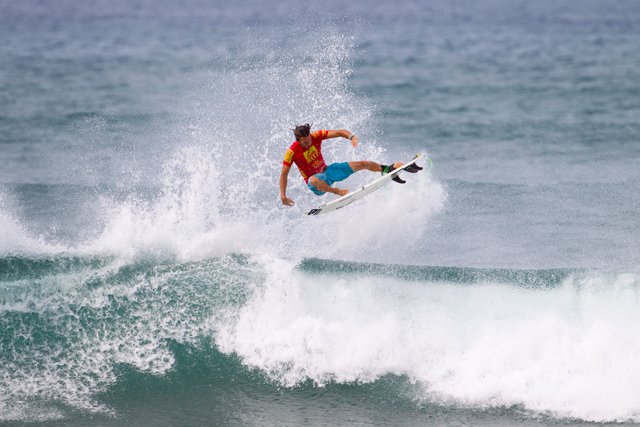 HONOLULU - (Thursday, November 15, 2012) -- The 30th Anniversary Vans Triple Crown of Surfing, hydrated by vitaminwater, officially got underway on the North Shore of Oahu today. Organizers of the REEF Hawaiian Pro were forced to wait on Mother Nature before a solid swell increase at midday sent competition into immediate fever pitch.

With $250,000 on offer in this event alone, and eight rounds of competition from start to finish, much is on the line for the 128 surfers from 15 nations who make up the REEF Hawaiian Pro. Surfline.com forecasts that wave heights will peak tomorrow morning before slowly declining through the weekend. It will be all systems go again tomorrow, and Saturday.

Lopez is back after four months out due to an ankle injury that didn't hamper him in the least today. Cory took to the air in a display that shot him to an early lead in the Hawaiian Air Show that offers 250,000 Hawaiian Airlines miles for the top aerialist of the series.

"Today's the perfect day to go for the Hawaiian Air miles," said Lopez. "There's a couple of long lefts where you can get a lot of speed and do the big air and the wind's perfect for it.

"I missed a lot of time in the water. I had a bad foot injury so this is the first event I've done in about four months. It's gonna take a little bit of a miracle for me to qualify, but the opportunity is there, but I"ll need a good run so I'll give it my best and see where I go."

Nathan Hedge is back on tour after a two year hiatus, hunting down valuable requalification points. A former ASP World Tour Top 10 surfer, Hedge has returned to Hawaii this winter on a mission to requalify. While it likely won't happen this winter, points gained here in the Vans Triple Crown will give him a vital seed for his 2013 qualification campaign.

"I took two years off and I'm refocused and got a new perspective, a new outlook and I'm enthusiastic again," said Hedge.

"Starting on the tour young, it teaches you a lot of things and it's interesting having the perspective of not being on tour and getting back on. I've got a new appreciation for it and I think surfing's come a long way. I'm just really excited to back and get another chance."

"If you do well in Hawaii it can change things. I've had a lot of support and backing over the years, so now I'm back for myself and it needs to come from me."

Hawaii's Mason Ho set up a late flare today with a double tube-ride to aerial that got the beach to its feet. Unfortunately the aerial was incomplete, or it would have been a perfect score. The son of early Vans Triple Crown champion Michael Ho, and nephew of  Pipe Master Derek Ho, Mason has plenty of great family insight to draw from.

Mason Ho takes it to the air. Photo: ASP/Kirstin

"I kind of got ahead of myself. I saw the air section out of the second barrel and I was already thinking, 'ok what grab?', and I wasn't even out of the barrel and that's what dad says, don't ever get ahead of yourself."

The Clash of the Legends will also take to the waves tomorrow at 11am.