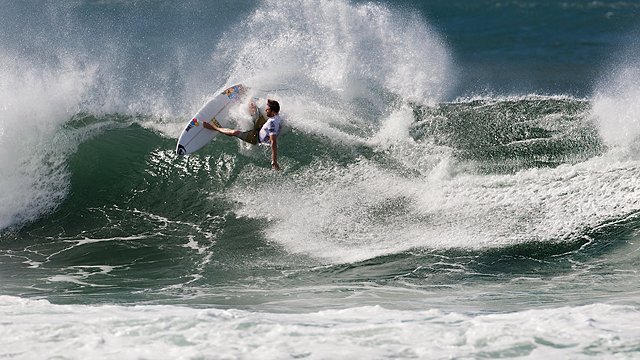 HONOLULU - (Friday, November 16, 2012) -- Pumping Haleiwa delivered the goods at the REEF Hawaiian Pro today with incredible tube rides, aerials and pure power surfing. For the world's top professionals and the surf-stoked fans who flock to the North Shore, this is what the Vans Triple Crown of Surfing is known for: quality surfing in quality waves.

Between the high-scoring heat of Australian Tom Whitaker, the mind-altering maneuvers of Ventura's Dane Reynolds, the tube-riding finesse of Torrey Meister, and the iconic Clash of the Legends, everyone went home fired up.

With so much focus and anticipation reserved each winter for Pipeline, Haleiwa can sometimes be overlooked in terms of its value and the quality of performances it produces. Haleiwa shone in its own right today and the surfer's noticed.

"It's really solid overhead, really powerful," said Whitaker. "Haleiwa's just so much water moving. It's awesome. It's actually a great surf spot, Haleiwa, it combines tubes and big powerful turns, forehand, backhand. It's just awesome to get really some solid surfing going.  It started out a little small (yesterday), but now it's just pumping.

"Hawaii's golden. To come here for over a month and just be able to surf some really nice powerful waves, all the aloha, all the boys really look after us here.  The Hawaiians and Aussies just have such a great vibe, and bbq's... and sunsets and surf. I'm not complaining!"

Dane Reynolds draws a crowd. Thankfully his heat took place after school got out and every North Shore grom got what they came for: pure surf stoke in the form of one outrageous close-out hack turned inverted layback (click here to watch) that resulted in a dramatic win.

"It was just kind of frustration 'cause my first couple waves were closeouts, then I got one and my board felt way too long and I just couldn't get any release out of the tail, so I was just going on a close out and just kinda doing what you can. (laughs)

"I enjoy coming here every year, riding bigger boards and getting some more powerful surf. Definitely out here is one of my favorites, I always like coming down here and getting washed around in the rip and getting some big waves, its pretty fun.

"It's more of a challenge and the waves always humble you, and that's fun. That's why I like it."

Return resident Torrey Meister took the honors of the first perfect 10 of the REEF Hawaiian Pro today: a well-woven double tube ride that got the beach to its feet. Incredibly, it wasn't enough to turn his heat around and he ended up still being eliminated in third place needing little more than a 5-point ride.