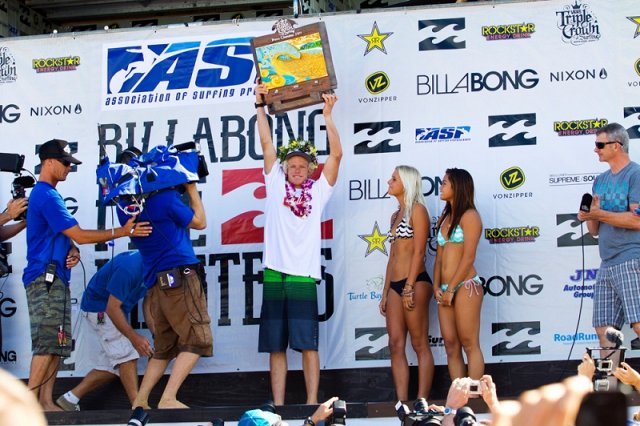 Past Triple Crown of Surfing Champions

John Florence was born and raised on the 7 mile miracle of Hawaii's North Shore and was destined to become a Vans Triple Crown of Surfing Champion. In 2011, John became the youngest surfer ever to claim the title. With a 5th at Haleiwa, a win at Sunset and a 5th at Pipeline there was no question John was the man to beat in 2011.

Joel “Parko” Parkinson won his second consecutive Vans Triple Crown of Surfing title last year in the midst of one of the heaviest ASP World Championship duels. Although he narrowly lost the world title to Mick Fanning at the Billabong Pipe Masters, Parkinson still managed to win the $50,000 Triple threat bonus and the 2009 Triple Crown title. His consistency and smooth approach at all three venues of the Triple Crown is legendary. In 2008, Parko didn’t win any of the Triple Crown events, but his performance at Pipeline that year was inspiring. At the 2008 Billabong Pipe Masters, Parkinson earned a perfect heat, garnering two 10-point rides from mind-blowing Backdoor barrels. Parko is the second surfer in modern history to receive a 20 out a possible 20 points in a man-on-man heat. The only other surfer to accomplish this feat is Kelly Slater.

Bede Durbidge is proof that a Triple Crown Championship will change your public perception forever. In the early part of 2007, Durbidge was known as dark horse competitor to the media, critics and fellow competitors. To those not so in the surfing know, he was known as “who?” After winning the 25th Annual Triple Crown of Surfing, Bede is no longer a spoiler. Now, he’s a contender in all conditions. Durbidge’s runner-up finish at the Reef Hawaiian Pro proved he could handle himself in big, chunky surf. And his Billabong Pipe Masters win in uncharacteristic beach-break conditions demonstrated his small wave versatility.

Kauaian Andy Irons was born and raised to dominate the Vans Triple Crown of Surfing. AI tops the list of most Triple Crown prize money won cumulatively with $271,725, and has the single season prize money record with $59,000, which he won in 2006. Irons tied with Sunny Garcia for most Triple Crown event wins, seven total (four at Pipe, one at Sunset and two at Haleiwa). Furthermore, Andy and Derek Ho are the only two surfers to win at all three venues of the Triple Crown. In addition, Andy’s battles with Slater at the Pipe Masters are epic, legendary duels that give us chicken skin whenever mentioned.

The Greatest Surfer of All Time

Nine ASP World Championships. Five Pipe Masters victories. Two Triple Crown of Surfing titles. A win at The Quiksilver In Memory of Eddie Aikau. There’s not a lot that Kelly Slater hasn’t done on the North Shore. Yet, the man who led the Momentum

Generation has never won a Triple Crown event at Haleiwa or Sunset Beach. This fact may be irrelevant, though, when you consider that Slater has won more Pipe Masters titles than any other surfer. In addition, Kelly was the first surfer to pull off the ASP World Tour hat trick by winning the ASP World Championship, Triple Crown of Surfing Championship and the Pipe Masters in one fell swoop. Kelly’s ongoing duel with Andy Irons since returning to the World Tour have been the greatest rivalry surfing has ever known. And, when Slater and Irons paddle battle one another at Pipe, the rest of us watch intently.

Michael Rommelse spent a decade on the ASP World Tour, but up until 1997 he had never won a major event. Everything changed for him at Sunset Beach that year when he won the World Cup of Surfing. From there, Mike rode the momentum and finished 9th at the Pipe Masters. With his 5th place at Haleiwa earlier that winter, he accumulated enough points to solidify the 1997 Men’s Triple Crown of Surfing title, allowing him to retire from the tour on a high note and permanently etch his name in the hallowed walls of Triple Crown history.

In 1996, at the Hawaiian Pro held at Haleiwa, Kaua‘i’s Kaipo Jaquias claimed he was after the Vans Triple Crown of Surfing title. After winning at Haleiwa and placing well at Sunset and Pipe, Jaquias’ claim became a reality for the history books. In the process, Kaipo became the first surfer from a neighbor island to win the Vans Triple Crown of Surfing, setting a precedence for Kauaian Andy Irons to follow.

The Triple Crown of Surfing Owner

Sunny Garcia has won more Vans Triple Crown of Surfing Championships than any other surfer. Furthermore, the Hawaiian Lion is the only person to win three consecutive Triple Crown titles. Although the 2000 World Champion has appeared in final heats at every Triple Crown venue, and has won multiple times at Haleiwa and Sunset, he has yet to win the Billabong Pipe Masters. Sunny came close to winning at Pipe in 1992, but was sent to the hospital twice that event. On the first trip he was treated for a torn muscle in his left forearm after a bad wipeout in his quarterfinal heat. He made it back to the beach in time to advance out of the semis and into the final. Half way into the final, he hit the reef head first and was rushed to hospital again for a concussion. Sunny would finish runner up at the Pipe Masters after Kelly Slater found his way into a small barrel in the last two minutes of the final.

As a two-time ASP World Tour Champion, Tom Carroll became the second Australian to win the Triple Crown of Surfing Championship in 1991. That same year, Tom completed “The Snap Heard Around The World” at the Pipe Masters. While most goofy foots stylishly pulled into the barrel at Pipe, Carroll took a different approach by performing a giant snapping top turn under the hook of a double-overhead Pipeline beast. Since then, no other surfer or single maneuver has stuck out like Tom Carroll’s snap.

Gary Elkerton grew up surfing in Mooloolaba, Queensland, Australia. A flamboyant and colorful “Aussie” known for his fearless and aggressive surfing, Elekerton earned the nickname “Kong.” In 1987, the regular foot won back-to-back at the Hard Rock Café World Cup and Billabong Pro, both held at Sunset Beach. His performance on Sunset’s demanding, shifty peaks is legendary. Furthermore, Elkerton set the standard for aspiring Aussie professionals as the first Down Under dude to win the illustrious Triple Crown title.

Derek Ho, Michael’s younger brother, was Hawaii’s first ASP World Champion. In 1993 he claimed the Pipe Masters and ASP World Championship at the same time. Yet Derek’s most memorable moment at Pipe occurred in 1986, when he pulled into an eight-second tube that spit twice on him. He set the bar for extraordinary Pipe surfing. If you ask young Hawaiian pro surfers how they want to win the Billabong Pipe Masters and Vans Triple Crown of surfing they’ll say: “Like Uncle Derek did in ‘86.”

Broken Arm and All

When Hawaii’s Michael Ho won the newly created Vans Triple Crown title for the first time 26 years ago, he was already famous. Michael has surfed around the globe and is known for his fearless approach to big surf. In fact, he won the Pipe Masters with a broken arm one year. Now a veteran surfer, Ho continues to impress the younger generation with his big wave skills. In 1997, at age 40, Ho again made it into the Pipe Masters finals, placing second to Johnny Boy Gomes. To this day, whenever Pipeline is going off, Michael Ho is still on it.