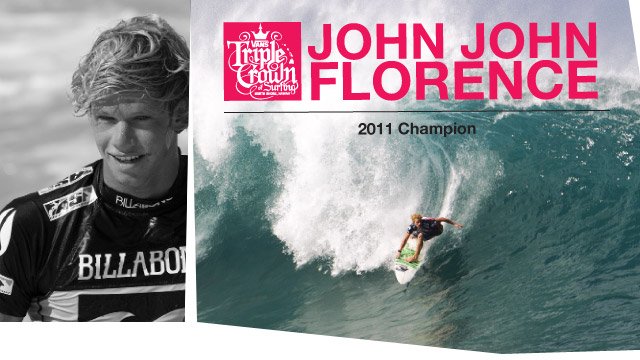 John John Florence is a Pipeline prodigy. Growing up on the North Shore, just steps away from the iconic wave and immersed in surf culture his entire life, John John has been groomed for surfing success and getting barreled at Pipeline is now his life’s work. The youngest ever Vans Triple Crown of Surfing Champion, John John took the trophy in 2011 at age 19, and now leads a new generation of professional surfers who are redefining progressive surfing in the most challenging waves in the world.

I’ve been lucky, growing up right on the beach at Pipe. Every year the whole surfing world comes to town and I’ve been watching and learning from that ever since I was little and it’s helped me out a lot. One memory that sticks out is Pat O’Connell getting a perfect 10 at Backdoor in the Pipe Masters. That was when I was really little. I think I was probably about eight years old and I remember being in the Johnson’s yard and Pat just getting this crazy, long barrel. And when Shea Lopez broke his leg, I was right there at the Vans house watching. That was heavy.

I used to be the grom that was going across the street to the school so I could get autographs from the surfers on the annual surfer night. When the contest was on, I used to sit all day watching guys like Slater and Andy battling it out. Then there are all the crazy heats that have happened and the world title moments. Growing up and seeing all that and actually being a part of it when I was really young, and then surfing it over and over and finally winning it last year, that’s been a crazy, crazy, build up. There was a lot that happened building up to that moment, and then all of sudden I was winning it—it seems like the time has passed so fast.

I was 11 or 12 when I got into the Pipe Masters. I remember the waves being gigantic. It felt like they were breaking all the way out to sea. It was so big and scary, but definitely a good experience. I’d surfed it that big before, but I think that day it was almost too big. There were a lot of wash through sets. And for me there was a lot going on, everything from being nervous, the pressure of being in a heat, all the people watching on the beach, the waves being giant—I was pretty scared.