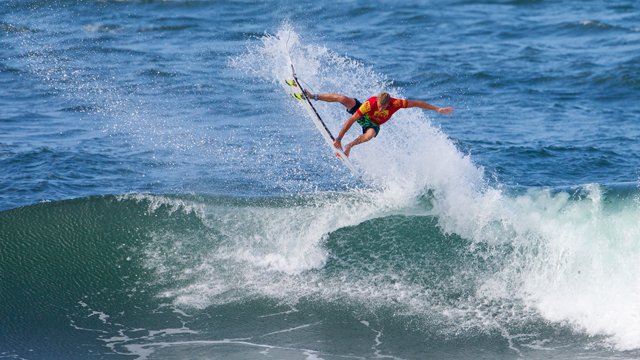 Zietz (above) was on a roll that only gained momentum, ending in a $40,000 win at the REEF Hawaiian Pro as well as an early lead on the Vans Triple Crown of Surfing hydrated by vitaminwater series ratings. Photo ASP/Kirstin

Zietz built incredible momentum through the rounds today and had won a good share of the 4,000-strong crowd by the time he secured a berth in the final against Florence, Fred Patacchia (HAW), and Muniz. With the rest of the fan base backing defending Vans Triple Crown champ Florence, it was game on for the final and Zietz was determined not to let it slip. He had his challengers on the ropes 20 minutes into the 35-minute final.

"Coming into Hawaii I was definitely feeling confident, feeling really confident in my boards," said Zietz. "And you know, I've had a few injuries over the years, and they're all healed up so I just believed in myself and I'm super stoked. I kept my head down and whoever I drew it didn't matter, I was just in a heat against myself."

Zietz has a start in the upcoming Vans World Cup at Sunset Beach and will need to be in contention for the Vans Triple Crown title by its end to surf in the third stage at Pipeline.

"Coming into it I was definitely thinking I wanted to qualify (for the 2013 tour) but I never would have imagined I'd be in the running for the Triple Crown. Sunset's a tricky one for me. I've never really done good there, but I've never done too well at Haleiwa either, so hopefully this could be my year. If I get into Pipe, I'll be super ecstatic, I love surfing contests there."

In the semi-finals, Florence posted a win in the highest scoring heat of the entire event  against Muniz and Australian pair Bede Durbidge and Tom Whitaker. The final score line showed 18 points for Florence; 17.7 for Muniz; 17.27 for Durbidge; and 12.17 for Tom Whitaker.

While he might have peaked one heat too early, Florence knows he has positioned himself right where he needs to be to defend his Triple Crown title. With world title pressure far behind him, and reaping the benefits of experience that comes from a full year of elite level competition, the 20-year-old exudes quiet confidence and total satisfaction with his level of performance.

"I'm just so happy for (Sebastian) to win and it looks like he's going to be on tour next year," said Florence. "It's always good to have another Hawaiian on tour, especially someone like him who's always positive and happy and making everyone laugh.

John John ripped all the way to the finals. Photo: ASP/ Kirstin

"I feel like each year I learn more and more on the tour with these older guys. Each heat I go into I learn something new and every time I lose it's just another learning point, really.  You just can't make mistakes against those guys or you're gonna lose."

On being in position to defend his Vans Triple Crown title that offers the bonus $100,000 this year: "You know, the extra money is always good, you're really stoked on that, but I think the prestige of actually winning the Triple Crown is really the main thing."

Equal fifth place overall for 2007 Vans Triple Crown champion Durbidge was at once satisfying and painful. His semi-final heat score of 17.27 points would have won him any other heat in the event excluding that one and the final, but wasn't enough to get him through. But he needed a strong showing here in his bid to re-qualify for the 2013 World Tour and is now in a great position to do just that. Based on past performances at Sunset, the likelihood that he will requalify is very high.

It was a great final day at the Reef Hawaiian Pro. Photo: ASP/ Cestari

"We waited and we scored some great waves and it's been an epic final day," said Durbidge. "I just missed out on the finals but it's a good start in the Triple Crown for me.

"It was absolutely pumping in the semi's and John John, he's just got something going on in the moment, as soon as he paddles out, he's  just pumping, and he's the man to beat. Everything's just happening for him.

"I always feel confident in Hawaii. I've got really good boards and I just love surfing bigger waves. Sunset's a good venue for me.  I've made the final there, had a third, and most years I've made the quarters or better. It suits my surfing."

Also equal fifth today, and still in contention for the Triple Crown title, is 6X champion Sunny Garcia (HAW), 42. Garcia was eliminated by Zietz and Patacchia in a heated semi-final match-up.

Competition now shifts 7 miles north to Sunset Beach for the Vans World Cup of Surfing (Nov. 25-Dec. 6) - stop #2 of the series. The Vans Triple Crown of Surfing, hydrated by vitaminwater, is the final stage of the 2012 ASP Tour. Organizers will assess conditions for a possible Sunday start.