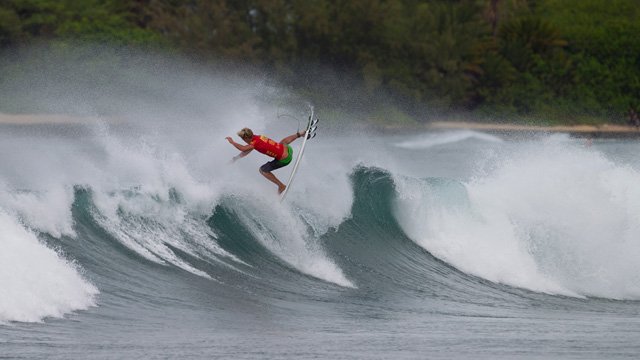 John John Florence's got his eye on the prize. Photo: ASP/Kirstin

HONOLULU - (Wednesday, November 21, 2012) - This week's champion of the REEF Hawaiian Pro at Haleiwa - the first jewel of the VANS Triple Crown of Surfing - will not only pocket $40,000 for the win, but will also get a head start toward the record $100,000 bonus that awaits this year's VANS Triple Crown champion. The $100K haul is on the table this winter in recognition of the 30th anniversary of the series. For 21 of the 28 surfers remaining in the REEF Hawaiian Pro, it represents more prize money than they have earned all year.  The final day of action for the REEF Hawaiian Pro will be this Friday or Saturday, surf pending.

While that might not move the needle as readily for a guy like Slater, who has made $3.4M in career prize money alone, it would be a game-changer for an up-and-coming athlete needing a ticket and a meal on the ASP world tour.

Not to mention the bonus hardware: a $30,000 Harley Davidson with custom spray job courtesy of Honolulu's JN Automotive; and the coveted custom $10,000 Nixon watch encrusted with more than 200 diamonds.

With head-high surf forecast for the final day of competition - to be held either this Friday or Saturday - it will be an interesting showdown. Key contenders would have to include:

Dane Reynolds (USA) - capable of astounding maneuvers in moments of pressure.
John John Florence (Hawaii) - defending VTCS champion free of world title pressure.
** Florence & Reynolds will be in the same heat of the Round of 32**
CJ Hobgood (USA) - highest heat scorer of the event so far.
Kelly Slater (USA) - capable of anything and everything.
Gabriel Medina (USA) - perhaps an aerial backflip is in store on the lefts?
Keanu Asing and Ezekiel Lau (Hawaii) - hungry, amped rookies.

Organizers will make a call at 7am on Friday morning for a possible start to the final day of action.

HEAT DRAW FOR THE ROUND OF 32: