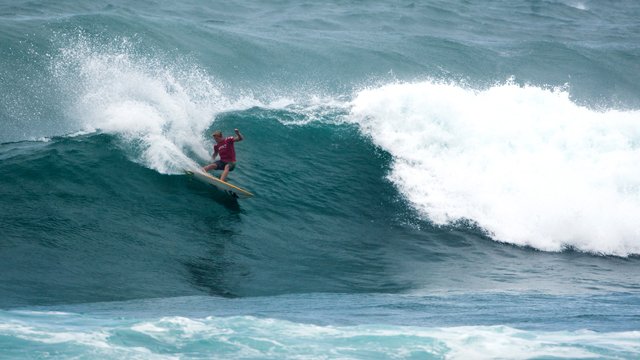 HONOLULU - (Monday, December 3, 2012) -- North Shore's John John Florence, the defending champion of the VANS World Cup of Surfing and the VANS Triple Crown series title, posted the highest heat score of the event at Sunset Beach today - 17.8 points out of 20. This is the third of four days of competition and Florence heads into tomorrow's World Cup final rounds as the man to beat.

Florence, 20, hit the waves immediately after 11X world champion Kelly Slater returned to the beach with a heat win, thinking he was the top scorer of the event: 17.04 points. As Slater sat in the VANS LIVE interview chair, he watched the tables turn right in front of his eyes.

Kemper opened with a perfect 10 wave score (watch it) after a couple of high risk lip gouges, and John John knew he had no time for warming up in the shifty, lumpy conditions. He answered back with a succession of deep, carving rides. He eventually took the win with Kemper second, Patacchia third, and Nathan Florence fourth. Patacchia's loss likely takes him out of contention for the VANS Triple Crown series title after his top-4 finish at Haleiwa.

"I saw the heat draw come up and in the beginning I was just thinking about my brother and I was kinda psyched for it," said John. "It was fun to surf with him and I was really hoping it would be me and him making it through the heat, but it didn't work out. The waves ended up kinda being weird and Billy ended up getting that 10 right in the beginning."

Billy Kemper dropped the only perfect score of the day. Photo: ASP/ Cestari

"Sunset is nearly impossible because something's always changing.  I went out there thinking I was gonna catch as many waves as I could. There ended up being bigger waves than I thought. It's just totally different when you get out there. Especially when you have this bump in it from these west winds that have been blowing and it just makes it real difficult.

"I have a really good connection with Sunset," said Alejo Muniz after his heat win. "The two times that I've surfed this contest I got into the quarter finals, so I love this place. I'm really happy to surf in this contest because last year I was injured, so I think that's what's been pushing me to get good waves and get in good results."

While Slater isn't in contention for the 30th Anniversary Triple Crown title, a solid crowd turned out to see him back in action at Sunset Beach today. Riding a board a good 12 inches or more shorter than anyone else, he looked fast and light as he carved up the lineup, even finding a rare, clean 3-second barrel on the inside.

"It's a tricky wave," he said of Sunset. "I don't surf it a lot and usually it doesn't weigh into the World Title, so I haven't put a lot of importance on getting to know the line up - exactly where to sit and which waves to go on during which swell directions and all that. There's no excuse, I just haven't put my time in at Sunset and it's never been one of my favorite waves, but it's a challenge for sure and there's guys that are clear standouts out here... Sunny (Garcia), Pancho (Sullivan), John John."

The Australian contingent was hit hard at Sunset today; of the 16 who competed today, only half survived. Among them were Kieren Perrow, Perth Standlick, Julian Wilson, and Jay Thompson.

"It's a football-sized playing field and you can be sitting 100 meters from the person and they can still get a 9 or you can get a 9, so it's not just like your regular peak," explained Thompson. "It's tricky but I enjoy it, that's what I like. It eliminates the hassling unless it gets much smaller, which tomorrow it could, so there might be a bit of jostling going down. But I guess that's what makes the sport pretty fun to watch."

Thirty-two surfers remain and organizers expect to push ahead with the finals tomorrow and complete the second of the three Triple Crown jewels.