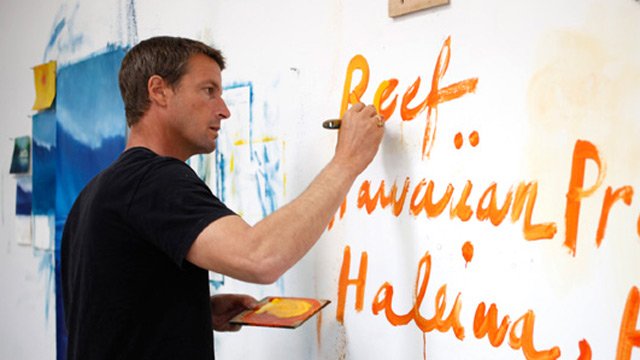 (San Diego, CA) October 31st, 2012 – Reef is gearing up to host the 2012 Reef Hawaiian Pro, first gem of the Van’s Triple Crown of Surfing, in addition to kick starting the iconic competition’s 30th Anniversary. The dramatic showdown taking place at Ali’i Beach Park on the North Shore of Oahu November 12th-24th marks the beginning of the end of the 2012 competitive surfing season. The ASP Prime event will attract the world’s elite all in search of valuable 2013 ASP World Championship Tour qualifying points, a $250,000 prize purse and the allure of winning one of Surfing’s most prestigious events.

The 2012 Reef Hawaiian Pro marks Reef’s 6th year hosting the event at one of the North Shore’s most beloved beaches and revered surf breaks. Reef commissioned esteemed artist, Alex Weinstein, to create the 2012 event artwork and to depict the iconic spot. Weinstein is best known for his emotive paintings and sculptures in which he intimately explores the ever-changing mood of the ocean environment. A lifelong and avid surfer, the work speaks directly to the immersive experience of time spent in the ocean while keeping an ardent discourse with contemporary issues in art.

When asked about the inspiration behind the work, Weinstein added, “Hawaiian waves are heavy and the commitment is personal. For me, the Triple Crown is more about the physical and natural challenges facing the individual than it is about competition. The waves are the main attraction. It’s about handling the immense power, in physical and historical terms, of Hawaiian waves. Again, it's personal.”

The tradition of handcrafted artistry and community carries over into the rest of the event. For those competitors that place in the finals, a handcrafted ukulele, made by Joe Green, owner of Surf N’ Sea in Haleiwa, will once again replace a traditional trophy as a gesture of thanks for participating in the 2012 Reef Hawaiian Pro. Reef is also proud to continue an ongoing partnership with North Shore Community Land Trust, a non-profit organization that aims to protect the natural landscapes, cultural heritage and rural characteristic of Ahupua’a from Kahuku Point to Ka’ena, as the official event beneficiary.

Alex Weinstein’s is an avid surfer, sculptor and artist living in Los Angeles, California. His work has been exhibited throughout California as well as New York, France, England, Australia, Japan and Brazil. His work has been both featured and revewied in The New York Times, The Wall Street Journal, Art in America, The Los Angles Times, The Providence Journal, The Surfer’s Journal and Elle Decor Magazine to name a few. In 2012 his work will be the subject of a short flim by Eric Swenson. For more information about his work head to www.vaguestudio.com.