Seth Moniz, 16, has no driver's license, but can negotiate the barrel quite nicely. Photo: ASP/ Cestari 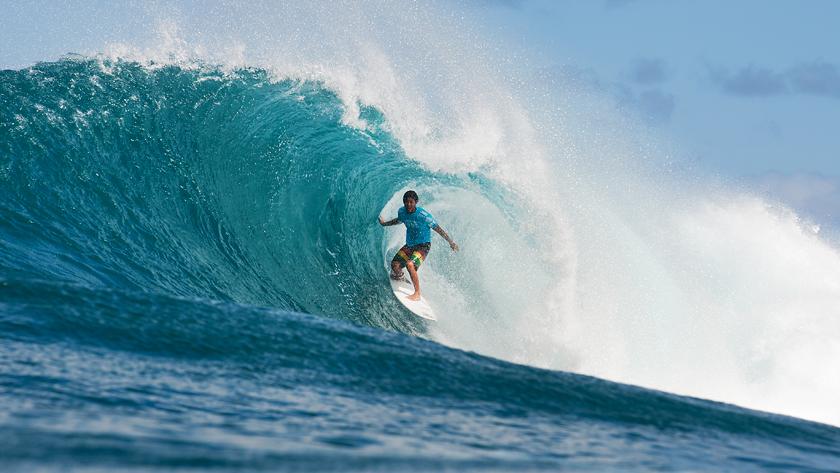 HONOLULU - (Tuesday, Nov. 26, 2013) -- Australia's Cooper Chapman, 19, and Hawaii's Seth Moniz, 16, provided a glimpse into pro surfing's future at Sunset Beach today, during the opening round of competition of the Vans World Cup of Surfing. Sunset is recognized as one of the  most challenging waves in the world, favoring years of experience, yet these two teenagers brought a level of maturity and exciting performance well beyond their years. The Vans World Cup of Surfing - the second event of the Vans Triple Crown of Surfing hydrated by vitaminwater®.

For Chapman, from North Narrabeen in Sydney, this is only his third time surfing on the North Shore of Oahu, and his first year competing in the Vans Triple Crown. But with legendary Australian surfer/shaper Simon Anderson on his team, making his equipment for the winter, he has an inside line on how to harness the Hawaiian power and turn it into results. Chapman reached the round of 32 at the Reef Hawaiian Pro last week and is now in the running for the JN Chevrolet Vans Triple Crown Rookie of the Year award.

"I had a good little sit down with (Simon) about a month before I came over," said Chapman. "We worked out some good boards and he just sort of gave me the run down on what made him so successful here.

"This is only my third time to the North Shore, so I'm just having a lot of fun, trying to feel out the waves. (Hawaii) kind of suits my surfing, so hopefully that works out for me over the years. It's just good to get a few heats under my belt in my first year.

"I'm siting in number 69 (ranking) after the last event which, considering I've only done half the year on the prime events, I'm really pleased with. I started with the smaller events and got a few really good results and built my way up. I'm competing with all the big guys. It's definitely a change but it's cool, you get to learn in every single heat. It's the lifestyle that I want to live, so I've got to give it my best shot and try to win heats."

Seth Moniz was the youngest of a trio of Moniz boys competing today: Isaiah, 19, who lost today, and Joshua, 17, who joins Seth to advance from the opening round. Their father Tony Moniz is their source of inspiration and insight - a former ASP tour surfer through the '80s and a respected big wave rider in his day. There's also a surfing sister in their family - Kelia Moniz. She won the ASP Women's World Longboard title in China last week. The family lives right here on the North Shore.

"There are so many good waves, I just got into a rhythm," said Seth. "I got my first (score of) six and then I just kept moving up from there. It's fun.

"I've been surfing this break since I was 10, and this is such a great event to do. I love it when it's just fun and playful. My dad knows a lot about these breaks so he shares with us. It's good to have him around, he just knows what boards to ride."

Other highlights from the opening day included Brazil's Heitor Alves, 31, who posted the highest 2-wave heat total of 18.37 points out of 20; and right behind Alves was Ezekiel Lau (Hawaii) with 18.1 points.

Waves are expected to drop from today's 6-8 foot swell tomorrow, then rise again for serious surf in the large to extra-large category on Friday.

The Vans Triple Crown of Surfing hydrated by vitaminwater® is the world's premier series of professional surfing events that will culminate with a 2-man battle between Kelly Slater (USA) and Mick Fanning (AUS) for the 2013 men's ASP World Title. From November 12 through December 20, on the North Shore of Oahu, Hawaii, $960,000 in prize money and a number of highly coveted titles will be offered across three ASP sanctioned events, including the  Vans Triple Crown of Surfing series champion.