Lau's win was not just a personal victory, but a big win for Hawaii too. Photo: ASP/Kirstin 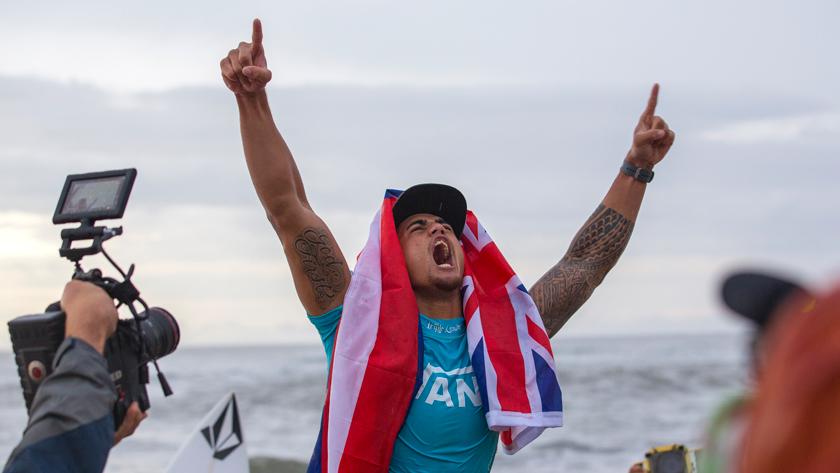 HONOLULU - (Sunday, Dec. 1, 2013) -- Hawaii's own Ezekiel Lau, 20, posted the largest victory of his young career today by winning the prestigious 39th annual VANS World Cup of Surfing at Sunset Beach - the second stop of the Vans Triple Crown of Surfing hydrated by vitaminwater®. Lau's win earned him $40,000 and sees him close the year at 35th position on the ASP world rankings. While that doesn't qualify him for next year's elite World Championship Tour, it does guarantee him an excellent seed. He also holds a shared lead on the coveted Vans Triple Crown series rankings with Michel Bourez (Tahiti) heading into the third and final event of the series - the Billabong Pipe Masters, where he is a local wildard entry.

Lau made a late tube-riding charge from behind to turn the tables on Damien Hobgood (Fl., USA) and Raoni Monteiro (Brazil) in the latter half of the 30-minute final. Fourth place was Frederico Morais, 21 (Portugal), who was announced the JN Chevrolet Rookie of the 2013 Vans Triple Crown. Lau went on the hunt and found his way onto the biggest waves of the final that also offered high-scoring tube riding potential. His final scoreline was 15.5 points out of 20 (8.67 and 6.83 point rides). Hobgood was second on 14.3; Monteiro third with 12.33, and Morais on 7.16.

Zeke pulling into a clean one. Photo: ASP/ Kirstin

For Lau and Morais to reach the final was an exceptional feat in itself. Both surfers entered the Vans Triple Crown with low seeds and therefore are surfing each event from the very first round. To reach the final they surfed seven rounds and endured every type of ocean and weather condition ranging from storm force winds and rain to wave face heights of 25 feet. They also knocked off the biggest names in surfing on the way: Lau took out 11-time world champion Kelly Slater (Fl., USA) in the round before the quarters today; and Morais twice beat John John Florence (Hawaii), eventually eliminating him in their semi-final.

"I can't believe it." said Lau. "I was building confidence through each heat.  It seemed like things were going in my favor and I was just getting the waves I needed at the right time, so having that confidence going into the final felt good.

"I needed something to boost my confidence a little, this year has been kind of rough.  You know that $40K feels good!  Making the final is great. To come out with a win puts me in a better spot.  My whole confidence and my whole game plan in my head and everything is going to be that much much better year next year."

Regarding his pole position on the Vans Triple Crown Series rankings: "Every year I think Hawaiian should be in (this position).  This is Hawaii, this is our event.  I am just happy to fly the flag for us and I am looking forward to it."

Hobgood, 34, needed to win to help his requalification chances, but has another crack at it through the World Championship Tour event at Pipe next week. He left everything in the water today, including skin off his nose and face after his tube-riding efforts over shallow reef.

Monteiro, 31, proved that dreams, hard work and clear goals can get you where you need to go. He knew coming into this week's event that he had to make the final in order to qualify for the 2014 World Championship Tour. He broke it down into minute-by-minute performances that saw him gain both momentum and confidence that made his dream a reality.

"Actually I am feeling super tired because it was a long day.  I think I surfed like 4 or 5 times and I...I just went heat by heat and wave by wave.  I wasn't thinking about pressure.  I needed the result and then I get the result.

"I won (this event) in 2010, so it is really good to be in the finals again.  I almost won for 5 minutes - it was really close!  Ezekiel deserved to win because he had the best waves of the heat.  I am really happy, that is all I have to say.  I want to thank God, I want to thank all my family and all my friends for supporting me and all the cheering for me and sending me good vibes.  It is a great feeling."

Morais was ecstatic with his Hawaiian winter performance: "It was my first Triple Crown so I had no expectations for Hawaii," said Morais. "I was going to come here and just do my job and have fun and try to climb the ranks to guarantee my position on the Prime events for next year.

"I ended up doing the final here making seven rounds. I think it was really good because I could just proved myself in every size of wave and I had really good fun. I got perfect Sunset the first few heats and really scary Sunset. Today was really kind of challenging, but still it was a really good day and I had a lot of fun. Winning the rookie award means a lot to me."

The Vans Triple Crown of Surfing hydrated by vitaminwater®.   now takes a brief respite as it waits for the official holding period of the Billabong Pipe Masters to commence: December 8 through 20.

Besides the rain, conditions were great for most of the day. Photo: ASP/ Kirstin

The Vans Triple Crown of Surfing hydrated by vitaminwater® is the world's premier series of professional surfing events that will culminate with a 2-man battle between Kelly Slater (USA) and Mick Fanning (AUS) for the 2013 men's ASP World Title. From November 12 through December 20, on the North Shore of Oahu, Hawaii, $960,000 in prize money and a number of highly coveted titles will be offered across three ASP sanctioned events, including the  Vans Triple Crown of Surfing series champion.