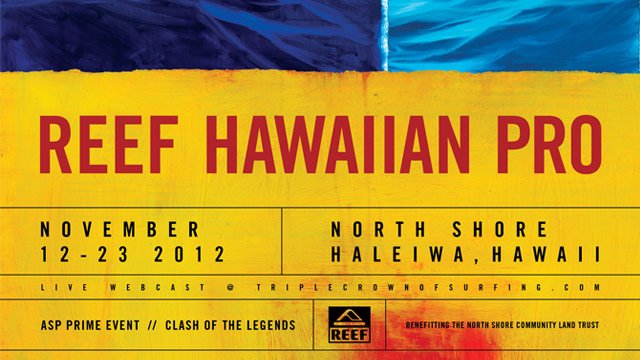 About the Reef Hawaiian Pro 2012

Haleiwa (Alii Beach Park) Best known as the gateway to the Seven-Mile Miracle, Oahu’s famed North Shore, Haleiwa town hosts the first stop of the Vans Triple Crown of Surfing, the Reef Hawaiian Pro. The event runs at Alii Beach Park on the west side of the Haleiwa Boat Harbor, where Haleiwa’s tricky reef is capable of delivering hollow rights, rippable sections and powerful closeouts.

Haleiwa is a true test of a professional surfer’s ability to handle a multitude of conditions, all at the same break. From two to four feet, Haleiwa is a rippable peak, with most surfers favoring the longer rights. Its racey walls allow for high-performance surfing at its best. At four to six feet, the right can get hollow and heavy and competitors will sit deep and look for the longest barrels. Over six feet, Haleiwa can handle, but the waves transform into powerful, punishing walls of water that race down the reef before closing out over the extremely shallow Toilet Bowl section. The shallow slab of reef is responsible for critical and dangerous end-of-wave maneuvers, as well the occasional broken board.

Best on a west swell, knowledge of the lineup is key at Haleiwa. As the surf increases in size, a strong rip develops across the lineup and can pull surfers out of position and right into the impact zone of an oncoming set. Most often, the winner at Haleiwa is the surfer who can handle themselves in a variety of conditions and have the stamina to continually fight the rip, heat after heat.