Mechanics of Pipe & Backdoor - What Makes It Work

There is no other wave in the world that has dominated the hearts and minds of surfers like Pipeline. For nearly sixty years, this frightening gift of nature has stood out as one of the most challenging and perfect waves on the planet. While first believed to be unconquerable, Pipeline soon became the wave by which all others would be judged. The evolution of tube riding itself, surfing’s holy grail, is largely woven through Pipe and Backdoor’s incredible history.

The strongest swells occur from October through April, when mid-latitude frontal lows of the North Pacific interact with adjacent high pressure. January is the climatological peak season, only occasionally dropping below the double overhead mark during the month, frequently too big and maxed/washed out. Winter swells are often consistent, range from short to long period, with travel time one to five days.

Tropical systems are not typically a swell source for the North Shore/Pipeline. However, recurving typhoons in the West Pacific often undergo extratropical transition (greatest chance during fall) or enhance developing winter storms of the Northwest Pacific. These extratropical or tropically enhanced lows can become some of the strongest storms of the season. 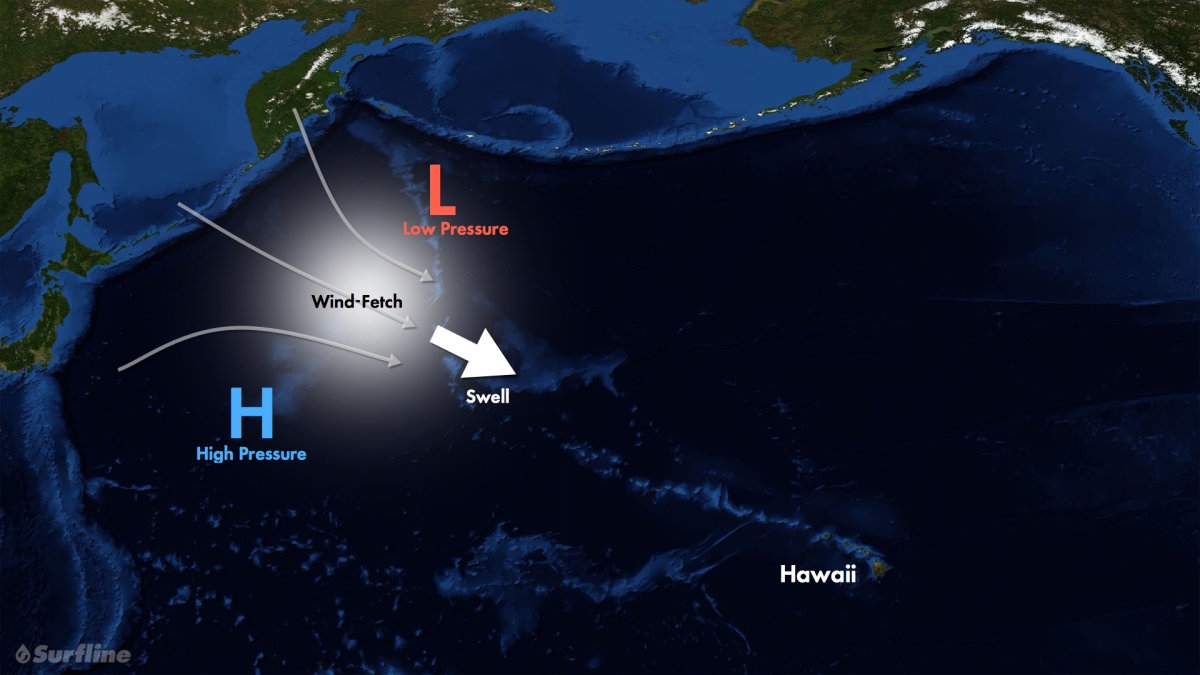 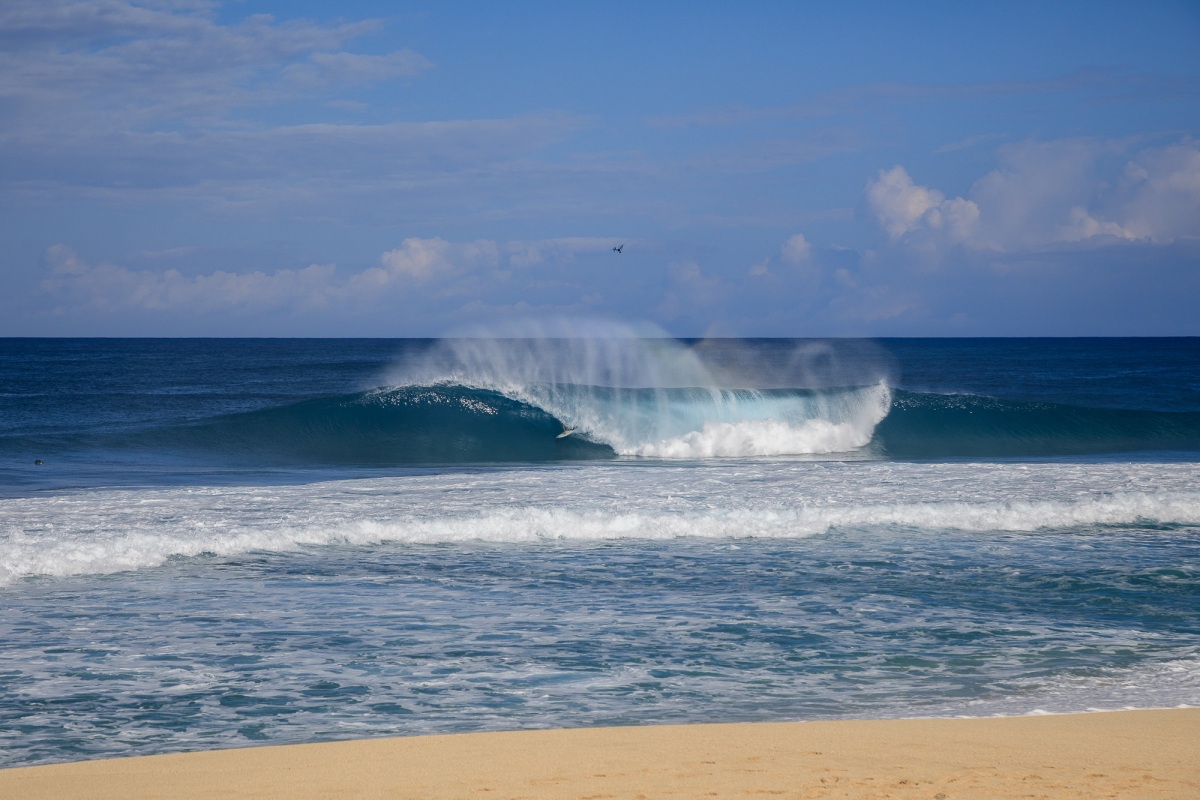 The Pipeline through Off-the-Wall swell window is open from the WNW (295°) to NE (38°). A narrow WSW to W window (248-273°) also exists between Kauai/Ni’ihau and Ka’ena Point, which allows rare tropical swells to shoot through. WNW to North swells are the most common direction, strongest as winter storms track eastward across North Pacific. The North Shore faces toward the northwest, directly into the path of incoming swell trains.

For the Backdoor right,  mid-period swells from the NW-NNW (315-350°) will open up best. When a swell is from the North to NE, the sets will sweep down to Off-The-Wall.

For a more consistent share of peaky A-frames with both Pipe and Backdoor working, you want mid-period NW swell from around 315-330°. 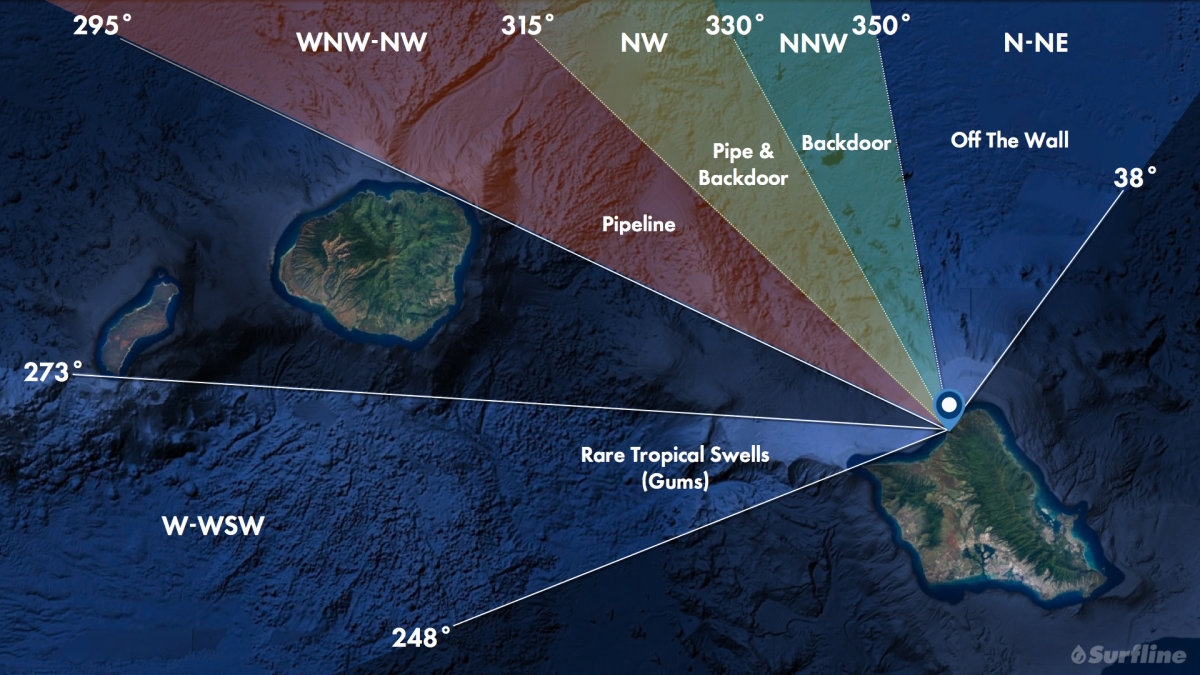 A wide window from the west-northwest to the north-northeast favors different breaks on different swell directions and periods.

Bathymetry plays a vital role in how waves behave when approaching and breaking along the coast, refracting energy into or away from different locations with each variation in swell direction and swell period. Pipeline is a swell magnet for northwest swells on Oahu’s North Shore, with the more westerly and longer period swells best. 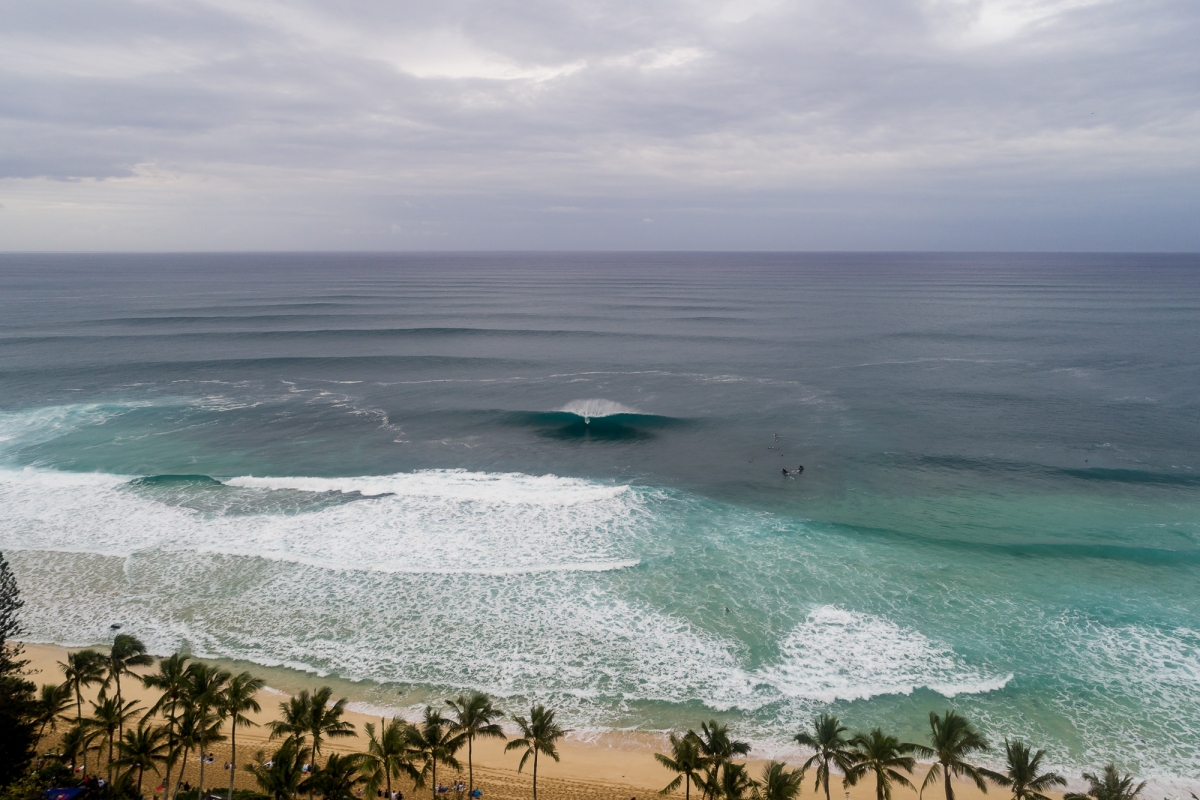 Due to the unique curve of the reef platform extending toward the West-NW past Outer Log Cabins (to a depth of about 60 feet+), much of the incoming WNW to NW swell energy is refracted into Pipe. Initial long period bands of a building swell are refracted so much by the reef off Outer Log Cabins that waves at Pipe will appear to come straight from the West even though the offshore swell direction is NW. This leaves the beach area at Log Cabins in somewhat of a swell void on longer period WNW-NW swells as most of the energy focuses toward the Pipeline arena.

The reef at Outer Pupukea redirects a portion of long period NW swell aimed at Pipe up toward Rocky Point. This action at Outer Pupukea, along with the Ehukai channel, helps to isolate the Pipeline left and keep it more open. More westerly angled sets refracted by the reef off Outer Log Cabins can peel across the reef at Pipe with fewer closeout end sections. Occasionally, the refracting West sets converge with the original NW lines in the ideal location on the Pipeline reef, amplifying the surf and helping to create some crossed up peaks. 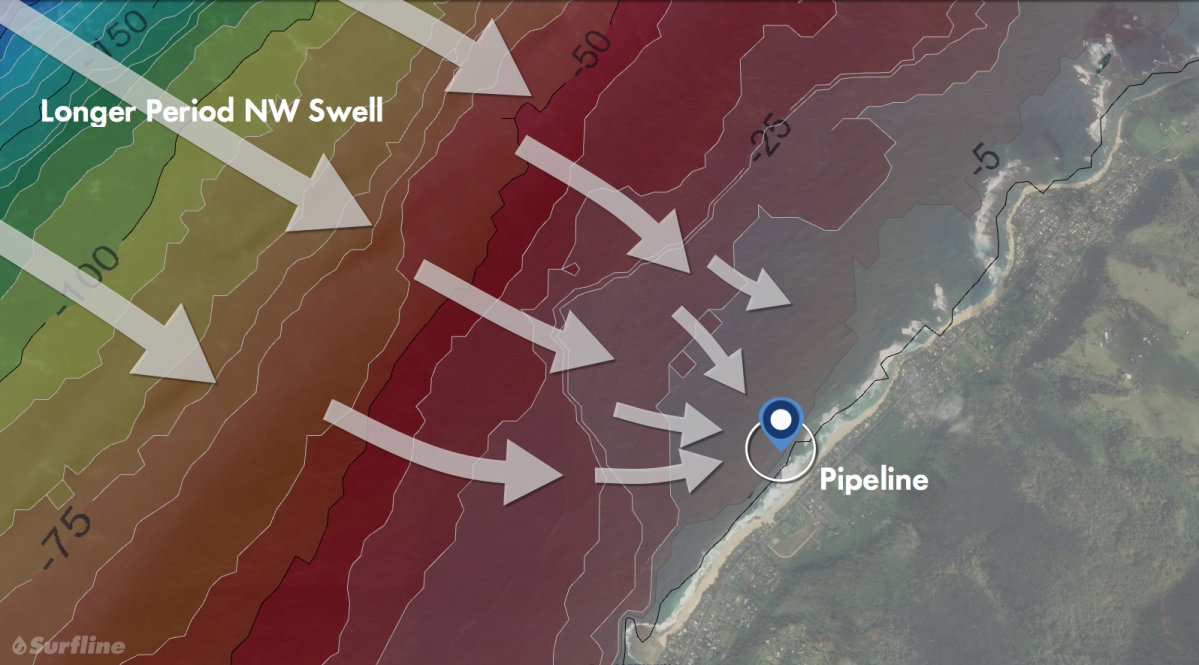 The reefs and resulting bathymetry make magic at Pipe.

As the period gradually decreases through the life of a swell event, the angle in the surf zone gradually shifts to match to its true offshore direction, usually resulting in a more northerly looking swell. Shorter period swells are less impacted by bathymetry and don’t refract as much on the outer reefs. Less West-angled energy refracts into Pipe by the bathymetry off Outer Log Cabins, as well as less of the original NW angled energy refracting away from Pipe by Outer Pupukea. The end result is a more dominant presence of the original NW direction into the surf zone, instead of an altered West direction.

Shortening swell periods and a more northerly angle bring about the short, fast and sometimes makable right off the main peak at Pipeline, infamously known as Backdoor. Without a real channel to speak of, Backdoor is mostly walled and closed out on the longer period WNW-NW swell events as the more dominant West sets will sweep across the reef favoring the left. Shorter period NW-NNW swells are more broken up and hit the reef head-on, creating A-frame peaks. These events can offer a gem of a hollow barreling right, and occasionally someone’s Wave of the Winter, or a lifetime.

The North Pacific High delivers a prevailing ENE trade wind for the Hawaiian Islands, a favorable direction for Pipe/Backdoor, especially when lighter. These trades sometimes become quite strong, veering more side-shore from the NE, which is an unfavorable and hazardous devil wind on the Pipeline left. Stronger NE wind usually results in undesirable, short period NE tradeswell mixing in. 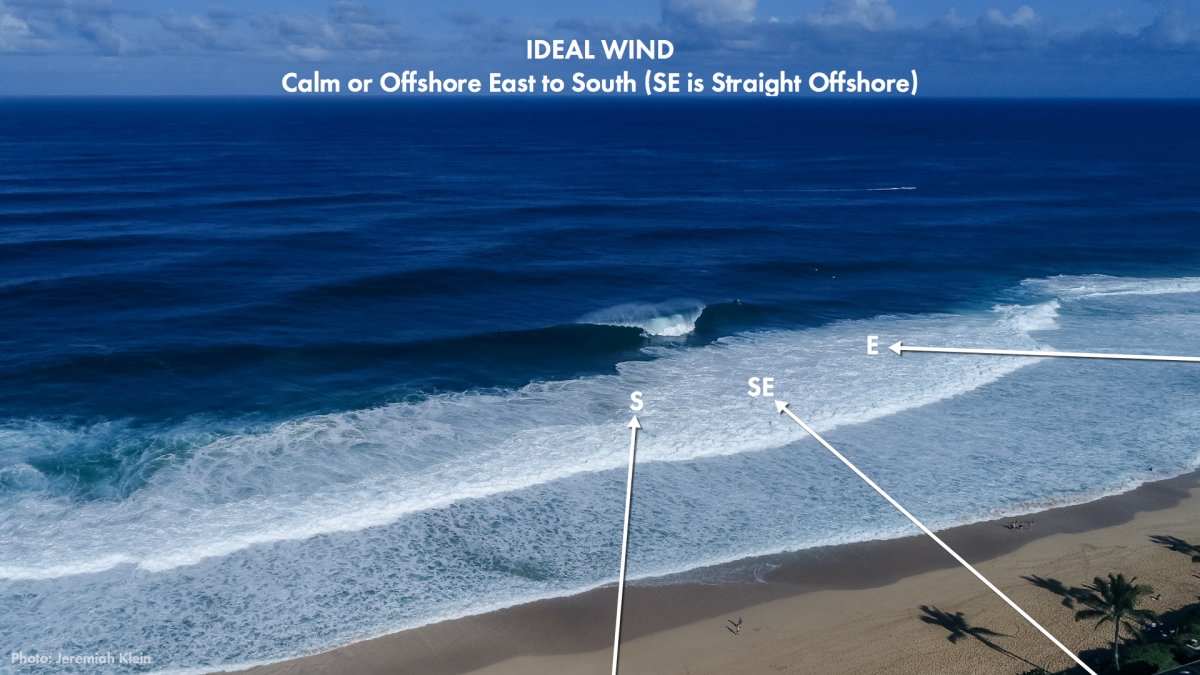 In an ideal setup, a front approaches from the NW, decreasing trades, clocking winds around to the south — SE is straight offshore — occasionally going slack.  Stronger, lower-latitude tracking storms that swing through the Islands continue to clock winds around, eventually bringing unfavorable SW Kona wind.

The wind then veers NW-North as troughs sweep through and high pressure builds in behind. These onshore winds sometimes coincide with the arrival of the swell, which is often the same storm system. More frequently, these fronts have a minor impact or miss Hawaii altogether due to the Islands more southern latitude.