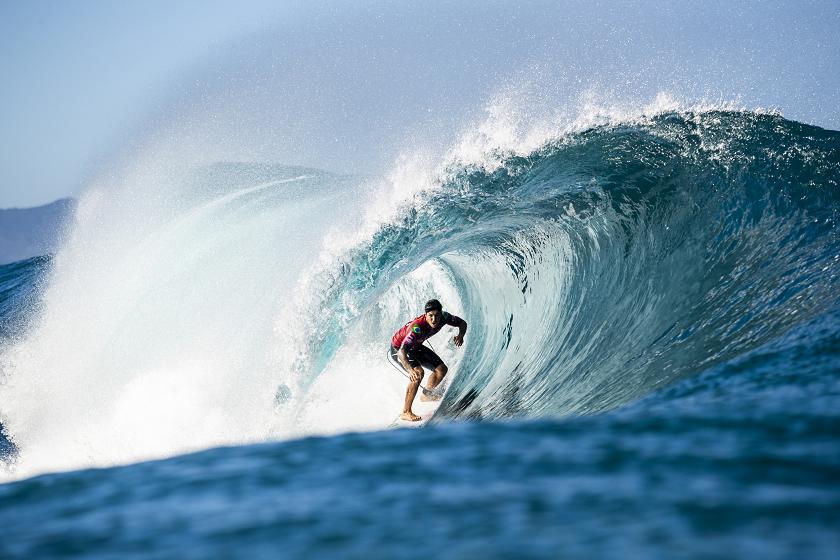 BANZAI PIPELINE, Oahu/Hawaii (Tuesday, December 10, 2019) - The Billabong Pipe Masters in Memory of Andy Irons, the final stop on the 2019 World Surf League (WSL) Men’s Championship Tour (CT) and third gem of the Vans Triple Crown of Surfing, completed its first two rounds of competition in six-to-ten foot (1.8 - 3 meter) waves at the world-famous Banzai Pipeline on the North Shore of Oahu.

As the final event of the Vans Triple Crown of Surfing, the Billabong Pipe Masters will see the 37th Champion crowned following six weeks of exciting activities along the North Shore. From all-time wave conditions and world-class competitive clashes to movie premieres, skate jams and community giveback activations, the heritage series continues to define the culture of surfing in the sport’s Mecca.

World Title Contenders on Track in Opening Round

Five surfers are mathematically in contention to win the 2019 World Title at this event: Italo Ferreira (BRA), Gabriel Medina (BRA), Jordy Smith (ZAF), Filipe Toledo (BRA), and Kolohe Andino (USA). The opening rounds today saw all five make it straight through to the Round of 32.

Two-time World Champion and No. 2 in the world, Medina, scored an 8.80 (out of a possible 10) in Round 1 Heat 5 for an impossibly deep frontside barrel followed by a layback snap to finish off the ride. With confident surfing, Medina didn’t seem to break a sweat under pressure and moved effortlessly into the Round of 32, where he will match up against wildcard Imaikalani deVault (HAW), who is surfing his very first CT event.

Pipe Invitational runner-up and wildcard, deVault clicked into gear and earned a 5.17 in Round 1 after threading through Backdoor, but fell to last place behind Medina and Willian Cardoso (BRA) and was forced to surf in the Elimination Round against Kanoa Igarashi (JPN) and Leonardo Fioravanti (ITA). The Maui surfer stayed alive in the competition after earning a 4.90 on a Backdoor wave, while Igarashi dropped in on a deep, Pipeline left for an 8.60 and the heat win.

World No. 3 Smith avoided the Elimination Round with controlled surfing that landed him safely into second position ahead of injury replacement Frederico Morias (PRT). World No. 4 Toledo and No. 5 Andino won their opening Heats 2 and 3, respectively, and will surf again in the Round of 32. 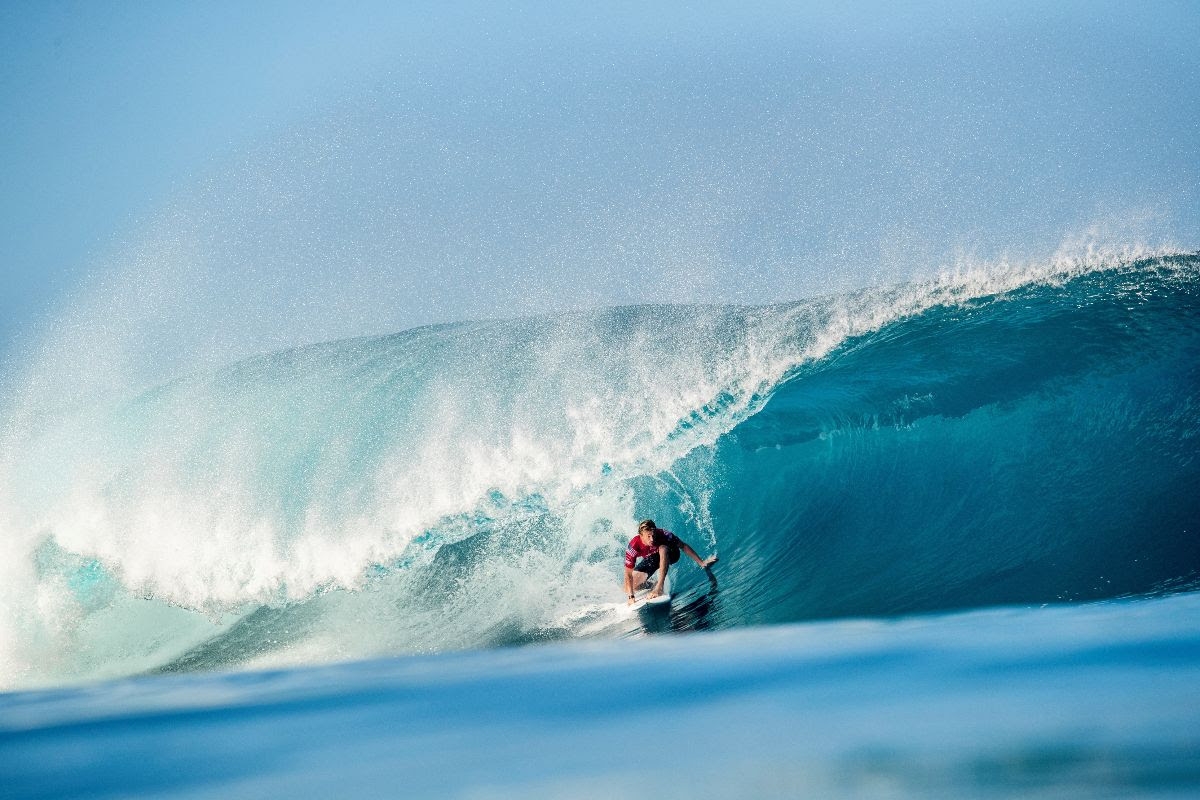 Kolohe Andino earned a heat win today and will matchup against Sebastian Zietz (HAW) in Round 3 Heat 16. © WSL / Cestari

“I feel like I have a good rhythm on how I’m competing this year and I just want to continue that rhythm for the rest of my career,” said Andino. “I just want to go out in my heats and compete. I felt like when I’ve surfed out here before or in the past I kind of surfed from a place of ego where I’m trying to prove something in my heat when actually it’s just a heat, and to advance is the most important thing so I just want to try and do that.”

Toledo competed with a different type of weight on his shoulders today, but was able to advance through his Round 1 heat on top with a combined heat total of 11.93.

“I’ve been through a lot actually, my baby boy has been sick for a couple of days now and I’ve been to the doctor with him twice,” said Toledo. “It just feels good to be around family and all the love from my mom and dad, it’s been amazing. Just that connection with God too has been super healthy for me. I feel good, I feel really good, I feel 100% for sure. Especially when it comes to barrels, I’m not pushing too much I just feel great.”

Billy Kemper (HAW), yesterday’s Pipe Invitational winner, showed up in a big way taking on World No. 1 Ferreira and Michael Rodriguez (BRA), truly shaking up the World Title Race as intended following yesterday’s win. Kemper's first wave was a committed late drop under the lip on the biggest Backdoor wave of the morning. He disappeared until the closeout section toward Off the Wall, then snuck out perfectly for a 9.4, the second-highest wave score of the day. Despite the swell direction favoring the lefts, Kemper’s work ethic and experience at the break saw him back up the excellent 9.4 with a 6.23 for a smaller Backdoor wave. With a similar approach, he raced down the line and once again snuck out of the barrel before the closeout section.

“Obviously, it’s an honor to share the water with the number one surfer in the world,” said Kemper. “At this point, I don’t care if you’re number 1 or 100 I want to beat everyone. I love competing. This is my backyard and just enjoying myself. I have my wife and children down here, my coach Kahea (Hart) and like I said, just having fun.”

As the competition encounters one of the best forecasts in recent memory, Kemper seriously has work cut out for him with the cbdMD Jaws Big Wave Championships set to run this Thursday and a possible Billabong Pipe Masters Final day on Friday.

“I trained really hard for this and am very excited about this week,” continued Kemper. “Jamie Mitchell took some of my boards over to Pe’ahi for me last night. In my mind, I planned on making it through today and going on to tomorrow. I hope I go on through my heat tomorrow and then will be over on Maui for the Big Wave for Thursday and then straight back here for Finals Day.”

John John Florence Returns to Competition, Advances to Round of 32 Alongside Kelly Slater

John John Florence (HAW) returned to CT competition for the first time since the Oi Rio Pro in June where he injured his knee. Prior to the injury, Florence captured two major event wins (Rip Curl Pro Bells Beach and Margaret River Pro) and created an outstanding lead for himself early on. In his first heat back today, Florence ended with a disappointing result but the two-time WSL Champion bounced back in Elimination Round 2 against Zietz and Morais to advance into the next round with a 6.50 and 4.43. His higher score came after he dropped in behind the peak on a draining Backdoor barrel, which put him in the lead.

“This year I’ve had a few sessions here and there, kind of getting the knee moving and stuff,” said Florence. “I’m just stoked to be in the water and surfing and getting little barrels. The knee is feeling super good, I’ve only surfed a handful of times so far, I’ve just been surfing in front of my house. It was nerve-wracking this morning getting back in the jersey, “Okay, here we go!” But once I got a few waves you just don’t even think about it anymore.”

John John Florence (HAW) made his competitive comeback at home and is onto Round 3 where he will face-off against fellow Hawaii-native Ezekiel Lau (HAW). © WSL / Sloane

On the line for Florence is a maiden victory at the Billabong Pipe Masters and more importantly, the opportunity to represent Hawaii with Team USA at the Olympic Games Tokyo 2020. The North Shore native is in the race with eleven-time World Champion Kelly Slater (USA) for the last provisional qualification spot after the first was clinched by Andino following his performance at the MEO Rip Curl Pro Portugal.

“It’d be awesome to be in the Olympics,” Florence continued. “That was one of the main reasons I came back. We’ll see what happens. I’m just stoked on the challenge it was to get back into this event. I think it’s going to be pumping. Tomorrow we’ll see what it does with the new swell filling in, it will probably be really good in the morning and maybe too big in the afternoon. It looks like next week there’s another swell coming. I’m excited, I hope we get some good proper Pipe.”

Slater is surfing in his 27th Billabong Pipe Masters this week and although he didn’t win his heat outright, he surfed well enough to advance into the Round of 32 behind heat winner Michel Bourez (FRA). Slater has won this event a record seven times over the span of three decades and is not only looking to win his eighth Billabong Pipe Masters, but also a third Vans Triple Crown Title and the historic Olympic berth.

“At the end of the day I probably have to beat John by two or three results,” said Slater. “If I get first he has to get fifth, something like that. Look he’s in, he surfed a great year. If I do happen to get it, I’ll think about it but to be ahead of me still after all this time shows how good a year he had going for himself and I wish we could both be in. But if he gets a spot I’m happy for him and if I get it it means I had a great contest so we’ll see what happens.”

Honolulu's Ezekiel Lau found the highest single-wave score of the day, a near-perfect 9.73 for a proper Pipeline set wave during Round 1 Heat 9. The Hawaiian dropped in while grabbing rail to find his line, then let go of the rail inside the barrel and came flying out behind the spit.

“I’m really stoked to get that wave,” said Lau. “To get waves like that and the moments that matter in heats like that mean the world to me. I’m just stoked. I told myself, ‘The waves will pick you,’ and I just sat there and it came to me so I was really stoked that I was able to make it.” 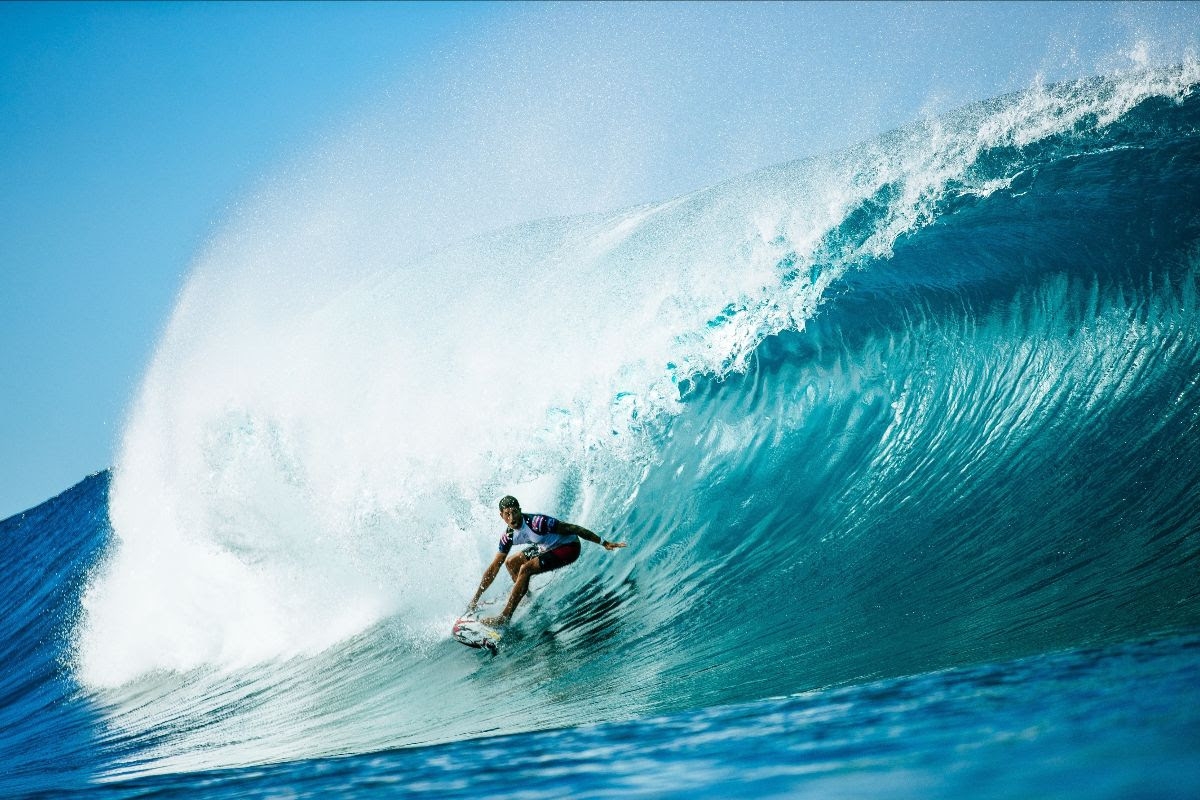 Lau is surfing for requalification as he currently sits No. 28 on the CT. He narrowly missed out on qualifying for the dream tour via the Qualifying Series (QS) after finishing second at the Vans World Cup at Sunset Beach and is using that pressure to fuel his campaign. Lau is also one of the frontrunners for a Vans Triple Crown of Surfing Title and is looking to add his first Pipeline victory to the list of accolades, not to mention playing spoiler to the World Title contenders. Lau thrives under pressure and has been  in intense scenarios before, including the Billabong Pipe Masters heat that determined his maiden run on the CT back in 2016.

“There’s a lot going on and I’m just trying to use my energy smart and channel everything and make every heat,” said Lau. “We’re going to take it one heat at a time, one wave at a time. Now I’m in the running for a Triple Crown, that’s where I want to be. I’m right where I want to be, I’m happy.”

Hawaii’s Seth Moniz and Zietz also advanced to the Round of 32. Rookie Moniz will be against compatriot Kemper in Heat 7, while Zietz will face off with Andino in Heat 16. 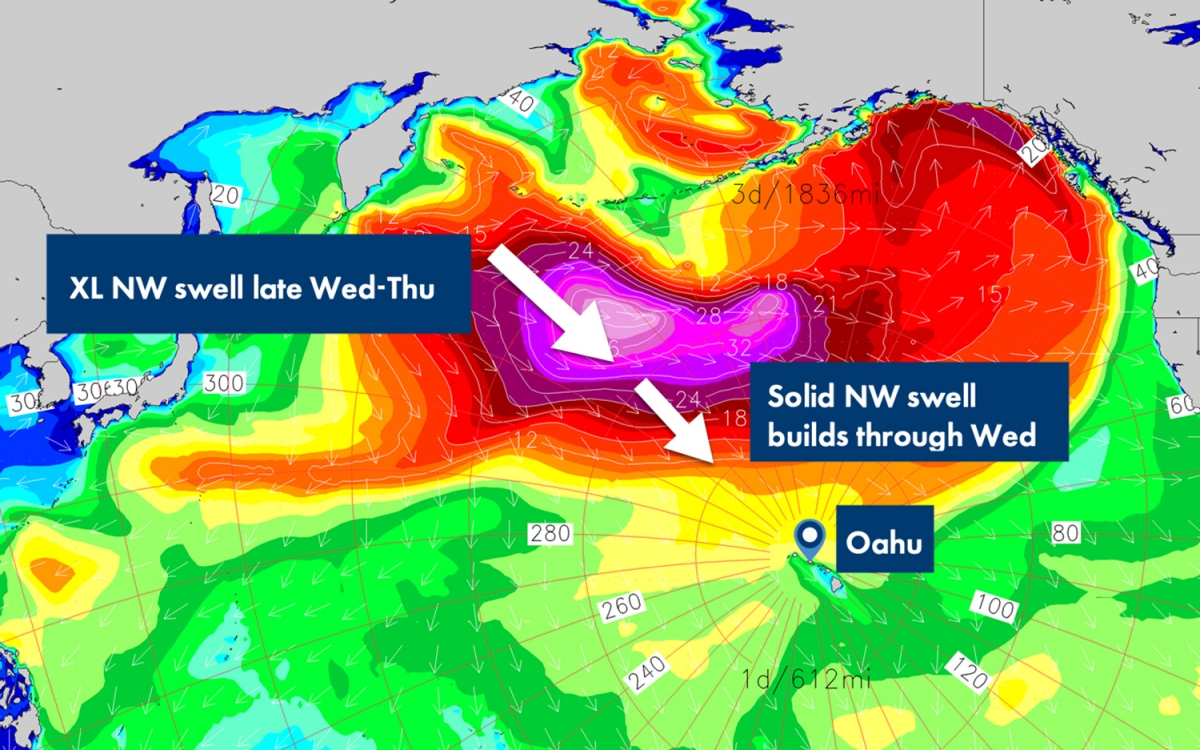