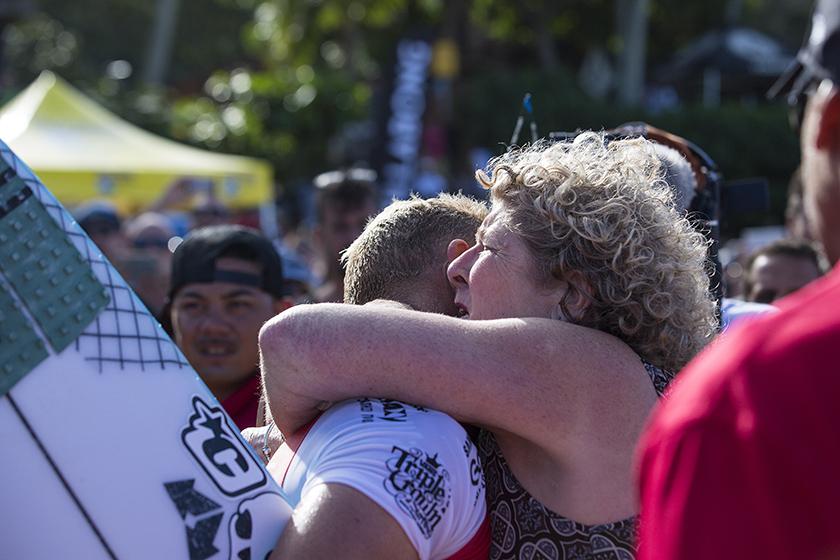 Mick Fanning's emotional roller coaster of a season continued Wednesday when he awoke to news that his older brother, Peter, passed away in his sleep. While word of the tragedy spread quickly on social media and in the Australian press, Fanning saved his thoughts until after continuing his World Title quest through Round 4 of the Billabong Pipe Masters.

After the conclusion of the event for the day, Fanning posted the following photo on his Instagram:

I am so grateful for the incredible love and well wishes that have come my way since learning of my eldest brother's passing this morning. Like all my big brothers, Peter will always be a hero to me. I have so many great memories of the good times we have all spent together and they will be with me forever. We recently caught up and he told me how proud he was of me and how much he loves watching me compete. Today was one of the most challenging days of my life but I knew I could find the strength to take part in the final event of the season because that’s what Pete would want. I also want to give special thanks to my other brothers – my friends on tour – for their support, I couldn’t have got through today without them. I would ask for some privacy on this matter while we come to terms with this devastating loss. Big thanks from our entire family. Tell the special people in your life you love them and give them a hug.

During Fanning's post-heat interview WSL announcer Peter Mel asked Fanning about the emotion he saw in his performance.

"It's been a huge day," he told Peter Mel after his Round 4 match. "I've just got some personal stuff going on at home and it's sort of heavy to talk about right now, but I don't know, I'm just sort of cruising, and just trying to live."

A number of competitors at the Pipe Masters offered words of sympathy in their post-heat interviews, including Glenn Hall (IRL) and Gabriel Medina (BRA).

Slater, who will face off against Fanning in their next heat, said after his Round 5 interview, "My condolences to Mick's family and to Mick. My heart goes out to those guys. They're going through some heavy stuff right now. I'm here supporting Mick as a friend and out in the water (during Round 4) I was telling him, 'just focus, good luck and have fun. Try to put everything out of your mind, all the pressure and personal things.' With all that going on it's hard to compete at your top level but he did that today and that's why he's a multi-World Champ and why he's staring down at another one."

WSL CEO Paul Speaker also weighed in. "Our hearts and thoughts are with Mick and his family today, a family that continues to give so much to so many. It's a terrible tragedy to learn of Mick's brother's passing. The entire WSL family extends their deepest condolences to the Fanning family and to all those affected."