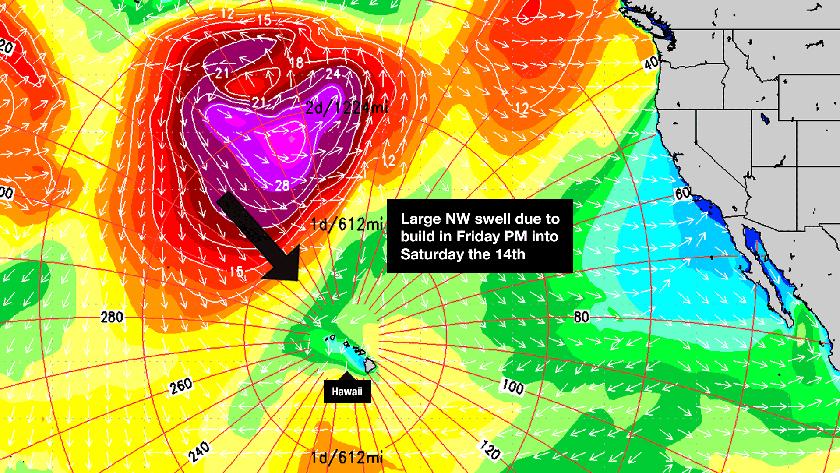 Very solid NW swell will be strongest in the early morning hours on Saturday, before gradually easing through the afternoon. The NW swell will fade through Monday. A fun size NW swell moves in for Tuesday, with an XL West swell possible for the final day or two of the event waiting period.

SATURDAY 14th: Large NW swell peaks in the early morning, easing over the afternoon/night.
SWELL/SURF: Consistent double to triple overhead+ waves at Pipe (faces running in the 10-18'+ zone) with larger sets at times. Some 2nd reef roll-ins to be had and the occasional 3rd reef wash through early.  Primarily Pipe, mostly closed out at Backdoor.
WIND/WEATHER: Light offshore SE wind in the morning. Some of the high res wind models indicate a weak sea breeze could develop through parts of the afternoon. Partly to mostly cloudy skies, occasional passing showers throughout the day.

As witnessed on local buoys and at Pipe itself this evening, our swell has arrived. We will see a further building trend during the overnight hours with the swell peaking in the early morning hours on Saturday.

Pipe will be at max capacity on Saturday, with consistent double to triple overhead++ sets marching in, some 2nd reef roll-ins, and occasional 3rd reef wash throughs (primarily in the morning). NOTE - This swell is very similar to slightly bigger than the Black Friday swell we had on Nov 29th. Also, spectators on the beach should exercise caution at all times, sitting close to the water's edge is not advised. This swell will be fading over Sunday (still well overhead) with smaller leftovers by early next week, while gradually shifting a little more NNW'erly (320-340 deg).

Further out; Models indicate that more storm activity may soon push off Asia and develop over the Northwest Pacific through the next several days. First up is a fun size NW swell (305-325 deg) for Tuesday the 17th with sets to a couple feet+ overhead if the storm behaves as forecast in the next day or two.

A much larger and possible XL WNW swell (280-310 deg) is ling up for the 19th-21st from a storm that is forecast to occupy much of the western North Pacific early next week. NOTE - If this pans out as currently forecast, Oahu will encounter partial to even heavy shadowing by Kauai on this westerly angled swell. Nonetheless, plenty of energy will still get into the North Shore with Pipe likely maxed out during the peak of the swell (but potentially very good on the way up and way down).

A front will stall to the northwest of Kauai on Saturday. We'll see light SE flow on Saturday and may even see a weak sea breeze flirt with us at times. Light/variable southerly wind is expected on Sunday. Possible light onshore seabreeze developing for all areas in the afternoon on Sunday. Mostly cloudy skies with passing showers on Saturday and potential for heavier rain on Sunday.

The front is forecast push through the Islands late Sunday/Monday, with light/variable wind. Then high pressure and light to moderate East-ENE Trades gradually return over Tuesday through mid week.