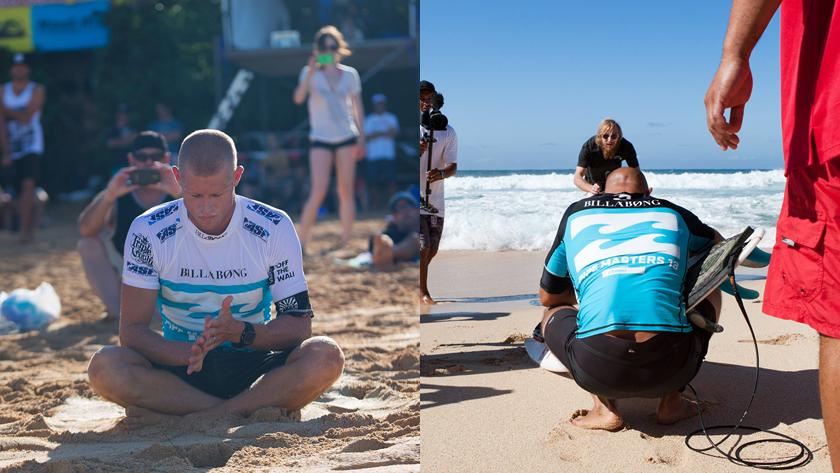 Surf journalist Sean Doherty delivers an interesting take on the title race and what went on yesterday at the Billabong Pipe Masters. Time to put the reading cap on:

"The scene: Kelly Slater’s parked on the side of the road in downtown L.A. It’s four weeks ago today. He’s just squeezed in 13 holes of golf before sunset and he’s on his way to dinner with friends. He picks the phone up and dials a number in Australia.

There’s always something cool about “Kelly Slater” coming up on your caller ID. The teenage fan in you never goes away. I toy with the idea of screenshotting my phone to capture this singularity but worry I might accidentally hang up on the champ in the process and be left waiting another five years for a return call. I answer.

We talk for half an hour; most of that time taken up by Kelly grizzling about how he feels like a bag of bones right now. He tells how he’s been worked on by an army of human panelbeaters every day for a week and jokes he’s finally feeling every one of his 41 years. He tells how he just got back from Fiji where he ran into Mick. Despite the collective will of surf fans the world over for this whole Mick and Kelly world title thing to go Shakesperean like it did between Kelly and Andy Irons a decade ago, it was pure happenstance the pair met in Fiji. Kelly had booked Tavarua six months in advance, while Mick booked his ticket to Fiji two days before when a swell popped up in the Tasman Sea. Neither knew the other was there and the pair met in the channel at Cloudbreak, Mick in a Fijian longboat and Kelly idling over on a ski. The handshake itself was awkward – wronghanded, upside-down, clammy – but the sentiment was genuine. The pair has been around the track enough times together for this to not get weird. Although a profession of love a la 2003 might not be out of the question after the dust has settled this week, and I’m already unsure how I’d feel about that.

Back in the car I ask Kelly about Mick. “Do you feel your relationship with Mick has change…” The mute night sky of L.A. suddenly burns white like magnesium and Kelly’s green eyes reflect a swoosh of light. “Whoooooah!” yells Kelly. “That’s so weird! Literally right when you said Mick’s name I just saw the biggest shooting star I’ve ever seen in my life. Literally as you asked that question. I thought it was a firework it was so bright. That was crazy. And I’m in Los Angeles where you don’t see shit in the sky at night.” When I ask him what he thinks this celestial firecracker means he replies, genuinely perplexed, “I… I don’t know?” He texted me a photo of the shooting star an hour later just to make sure I wasn’t thinking he was cosmically delaminating.

And so here we are at the Pipe Masters a month later and the day has arrived. Mick and Kelly would surf their first Pipe heats today. This morning was an ugly duckling morning. Even as a guy shone a green laser-pointer into the lineup at 6:15 a.m. this morning something didn’t look right about it. The swell was from the leading edge of the Aleutian system and had a raw, west aspect to it. Most everything was closing out. Mick – as he has done every morning for the past month – was the first guy out, but white lightning........"

To read the the full article, go to: