Kelly and Mick will battle to decide the 2013 ASP World Title. 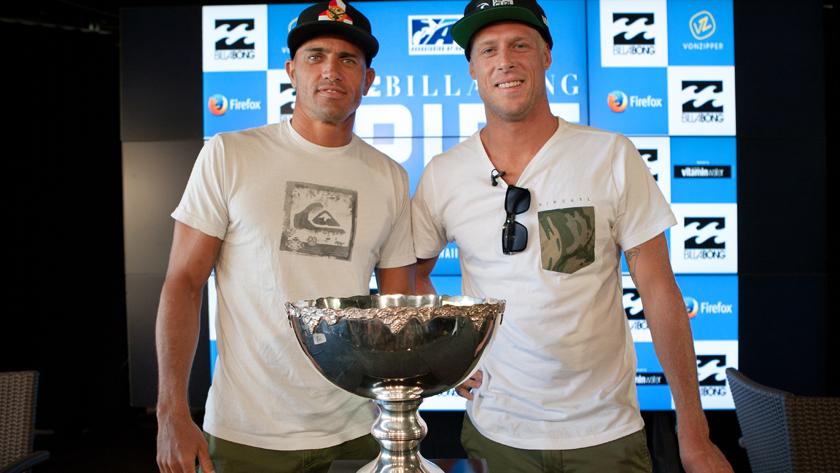 PIPELINE, Oahu/Hawaii (Saturday, December 7, 2013) – The waiting period for the Billabong Pipe Masters in Memory of Andy Irons begins tomorrow, December 8, and with a promising swell pulsing into the North Shore, the world’s best surfers could take on the heavy Hawaiian barrel of Pipeline and Backdoor as early as tomorrow morning.

The final stop on the 2013 ASP World Championship Tour (WCT), the Billabong Pipe Masters will see the culmination of the ASP World Title Race between Mick Fanning (AUS), 32, and Kelly Slater (USA), 41, the final 2014 ASP WCT qualifiers and the crowning of the coveted Vans Triple Crown of Surfing Champion.

Mick Fanning, two-time ASP World Champion and current ASP World No. 1, secured his last ASP World Title at Pipeline and is in familiar territory entering the culmination of the 2013 season. While the stakes are high at the Billabong Pipe Masters, Fanning is currently in a relaxed mindset entering competition.

“Last year was exciting because I was a real long shot,” Fanning said. “I was kind of stoked that I got to sit back and watch Kelly (Slater) and Joel (Parkinson) battle it out, but this year everything’s feeling good. There’s a lot of surfing and a lot of things that have to happen (to win the World Title). You have to take it as it comes and enjoy it. There is a long break before the Pipeline event, but I’ve been keeping busy when my mind starts to wander and think about the World Title.”

Having fun before it gets serious. Photo: ASP/ Cestari

Kelly Slater, 11-time ASP World Champion and six-time winner at Pipeline, must win the Billabong Pipe Masters in order to surpass Fanning to claim a 12th ASP World Title. In the event that Slater does win, Fanning must place third or higher to secure the title for himself. While Slater is one of the most decorated surfers in Pipeline history, he knows the road ahead will be no easy task.

“I’m feeling pretty relaxed, but I’m sure as the event starts the reality will set in,” Slater said. “The reality is, I need to win the event. Hopefully Mick (Fanning) doesn’t get to the Semis like he’s done in every other event this year. I’m pretty excited and I think we have a bit of good surf in the forecast and if we don’t get through the next couple of days, it looks like there could be a nice Pipe swell.”

While Slater has won five ASP World Titles since his return from retirement in 2002, the Floridian has not secured the coveted ASP World Championship at Pipeline since before his return to competition.

“I did win a couple World Titles at Pipeline in the 90s,” Slater said. “They’re definitely a lot nicer to put away early because you’re always going to have that period of time where you have a lot of time to think about what could happen. This situation is pretty black and white for me. I think if Mick were not to get past the Quarters and I was, then the pressure is very clearly on my shoulders. Until that time, I don’t feel like it’s a very stressful situation, but at that time, it could be the most stressful situation of my life.”

Joel Parkinson (AUS), 32, reigning ASP World Champion and defending Billabong Pipe Masters Champion, is no longer in contention for the ASP World Title, but is ready to attempt a repeat victory at arguably the world’s most iconic venue.

“I’m just excited to not have the World Title to think about and it’s nice to just think about surfing your heat,” Parkinson said. “It’s an opportunity to surf with one other guy at Pipe and I’ve still got a chance at a Pipe Master. It doesn’t have the same energy as last year, but it’s by far the most honored contest to win.”

Michel Bourez (PYF), 27, current ASP WCT No. 11, is currently tied for first on the Vans Triple Crown Rankings with Ezekiel Lau (HAW), 20. the Tahitian kicked off his Hawaiian run with a big win at the Reef Hawaiian Pro, but stumbled at Sunset Beach and is looking for a standout performance at Pipeline.

“It’s always nice to win a contest here in Hawaii, especially Haleiwa because I won it a couple of years ago,” Bourez said. “I had such a bad run at Sunset, but I’m just stoked to be here in the position with Zeke (Ezekiel Lau).”

Ezekiel Lau punctuated his 2013 ASP Qualifying Series with incredible form, securing a win at the ASP Prime Vans World Cup of Surfing at his home break. The win would vault the Hawaiian in to a tie with Bourez on the Vans Triple Crown Rankings and this season will mark Lau’s first career Billabong Pipe Masters appearance.

“I’m really happy to be alongside these guys and this is my first year in the Pipe Masters,” Lau said. “I’m really excited. I’m trying not to think about the names too much and I’ve been surfing out here (North Shore) my whole life. I really enjoy surfing out there and know the wave a lot. I feel real comfortable and I’m going to try and use that to my advantage.”

Event organizers will convene tomorrow at 7:30am to assess conditions for a possible 8am start.

Lau will face off against Patrick Gudauskas (USA), 28, in the opening heat of the Billabong Pipe Masters.

Surfline, official forecasters for the Vans Triple Crown of Surfing, are calling for:
Solid NNW swell will kick off the Pipe Masters on Sunday the 8th with well overhead surf and light wind. Good NNW swell and favorable wind conditions will continue through Mon/Tues the 9th-10th as well, before the swell drops off thereafter. Possible decent size pulse of new NW swell for around Fri/Sat the 13th-14th.