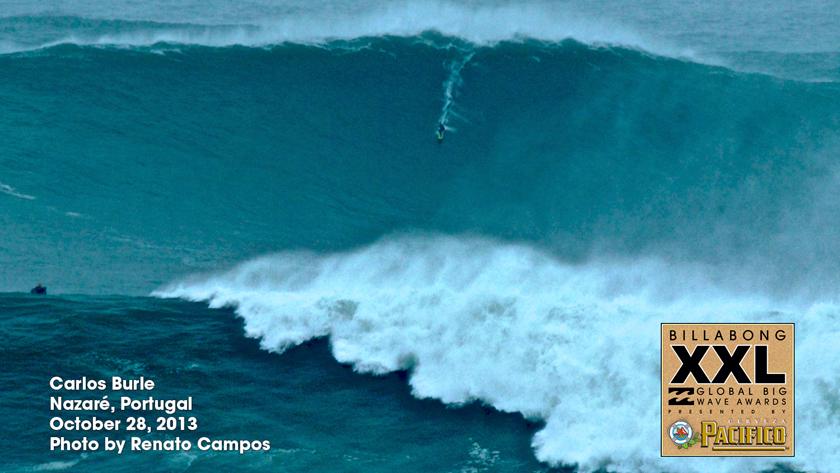 NEWPORT BEACH, CA - (November 25, 2013) - The new event website for the 2014 Billabong XXL Big Wave Awards presented by Pacifico has just launched for the key winter season and features all the epic moments that have combined to already make the current year of surf the most spectacular to date. Located at BillabongXXLcom, the site aggregates the best video and still photos of every outrageous big wave ride this year in one place, allowing viewers to easily compare the top contenders from all around the world. In May, winners will be revealed at a gala awards ceremony where over $120,000 in prize money will be distributed to champions in seven different categories.

"This has been an extraordinary year for big wave surfing and with the Northern Hemisphere winter still to come, there is little doubt this will be the greatest ever in the 14 year history of the Billabong XXL Big Wave Awards," said Bill Sharp, the event's director and founder. "There have been amazing waves everywhere, from Tahiti to Tasmania to South Africa and Hawaii. But the epic St. Jude's swell that hit Europe in late October became one of the most famous moments in the entire history of the sport. It's hard to find anyone on the planet that didn't hear the news reports of possible world record waves being ridden at Nazaré, Portugal and the incredible surfing feats of Carlos Burle, Maya Gabeira, Andrew Cotton and the rest.

Hawaii's Koa Rothman rode this monumental tube in Tahiti in May. Click for the video.

"The eyes of the entire world are truly on big wave surfing and that should add a whole new level of interest about who comes out on top at the XXL Awards show in May," Sharp added.

The BillabongXXL.com site features all the images of the great waves, including what may be the clearest video yet seen of Burle's mammoth storm-borne Portugal peak, available for viewing HERE.  Also presented for comparison are awesome tubes from Teahupoo in Tahiti and Shipstern Bluff in Tasmania, mighty paddle-in waves at Jaws in Hawaii, Puerto Escondido in Mexico and Dungeons in South Africa, and crazy tow-in waves from Mullaghmore Head in Ireland and Punta Docas in Chile.

Click image above to see Mark Healey in action at Jaws, Maui, Hawaii earlier this month.

"This is easily the most thoroughly international year we've ever seen," said Sharp. "Between the surf breaks or the surfers, every region of the globe is fully represented."

Surfers are contending for five nominations to be revealed at the end of the winter in an assortment of divisions, including the tallest waves in the Pacifico Paddle and XXL Biggest Wave categories, the Pacifico Tube for heaviest barrel, the Surfline Mens and Billabong Girls Best Overall Performance Awards and the good-natured Best Wipeout of the Year.

The most important honor at stake each season is the Ride of the Year Award that features a first prize of $50,000 to the winner. Also of keen interest for 2014 is the determination by the XXL judging committee on the heights of the biggest paddle and unlimited waves successfully ridden. The Billabong XXL Big Wave Awards provides the data on Largest Waves Surfed in both disciplines to the Guinness World Records. The current records for PADDLE and UNLIMITED may be viewed on the GWR website.

Australia's Laurie Towner is entered in the Pacifico Tube category of the Billabong XXL Awards with this Tasmanian devil of a wave. Click the image above to see video of the ride.

The Billabong XXL Big Wave Awards annual cycle runs through the vernal equinox on March 20 and nominees will be announced soon thereafter. The invitation-only XXL Awards night ceremony will take place on May 2, 2014 at the Grove Theater in Anaheim, California and will be available on a live webcast and as a one-hour TV show on the ESPN Networks in June.

The Billabong XXL Global Big Wave Awards are presented by Pacifico Beer. Pelican Products is the official provider of waterproof cases. Surfline.com is the exclusive surf forecast of the XXL. The event is sponsored by Surfing Magazine and Air Tahiti Nui airlines.