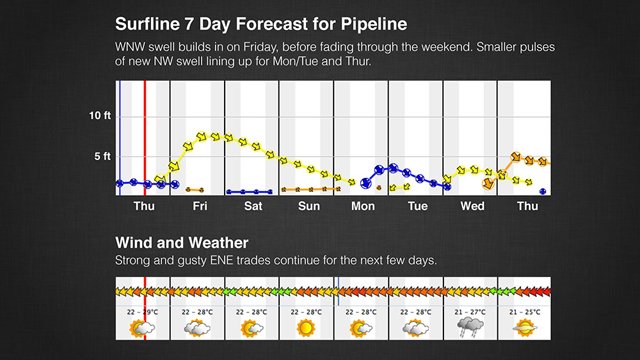 BRIEF OVERVIEW: New WNW swell will build in through the morning and continue over the afternoon on Friday, before tapering off Saturday. Smaller, short lived NW swells are possible for Monday afternoon/Tuesday morning and also Thursday of next week.  Strong and gusty ENE trades continue for the next several days.

FRI (14th)
SWELL/SURF: New, longer period WNW swell builds in through the morning and continues for the afternoon. Most waves at Pipe will be in the 5-8’ range on the face through the day, with largest waves of the day up to 10’.
WIND/WEATHER: Strong and gusty ENE trades.

SAT (15th)
SWELL/SURF: WNW swell fades through the day. Surf is in the 5-8’ range on the face, strongest in the morning, and fading through the afternoon.
WIND/WEATHER: Strong and gusty ENE trades.

We’ll see a building trend through the morning on Friday from the WNW, with the swell continuing in the afternoon. Most of the waves at Pipe will be in the 5-8’ range on the face, with the larger/largest sets of the day up to 10’ on the face. Overall expect some waits and lulls in between the largest sets. Saturday morning will be down some from Friday afternoon and a decreasing trend will prevail through the day. Much smaller leftovers on take over on Sunday and into Monday morning.

Going further out, there are a couple more swells on the horizon to close out the waiting period; one for late Monday and Tuesday and the other for Thursday the 20th. If the fast moving storms setting up these swells behave exactly as forecast in the next few days we would see short lived swells a bit smaller than what we’ll see tomorrow. Various models are not in good agreement on the size, strength and tracks of these respective storms, so there remains a fair amount of uncertainty on the exact size and timing of each. Stay tuned.

Strong high pressure will be located to the north/northeast of Hawaii for the next several days. Strong and gusty ENE trades continue for the next few days. Skies are partly to mostly cloudy with occasional passing showers.

Watch the Mechanics of Pipeline