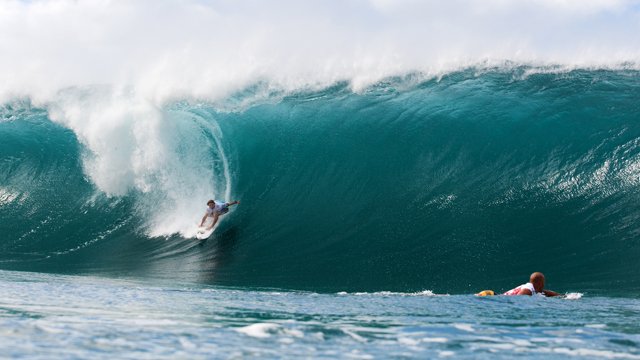 HONOLULU - (Saturday, December 8, 2012) -- The Billabong Pipe Masters in Memory of Andy Irons kicked off Round 1 of competition today in pumping six-to-eight foot (2 metre) waves at Pipeline, hosting the ASP Top 34 as they battled the notorious local wildcards in an attempt to requalify for the 2013 ASP Top 34. The 2012 Billabong Pipe Masters, the final stop on the 2012 ASP World Championship Tour (WCT), could crown the 2012 ASP World Champion as early as tomorrow, and will also crown the 30th anniversary VANS Triple Crown of Surfing champion.

With the top seeds expected to hit the water tomorrow, all eyes will be on the three surfers in mathematical contention for the 2012 ASP Men's World Title. Current world rated number 1, Joel Parkinson (Gold Coast, Qld, AUS) is in the box seat, with just 3000 points separating him from reigning and 11-times world champion Kelly Slater (Fl, USA). Should Slater be eliminated prior to the quarter-finals, Parkinson will claim his first world title.

Former two-time world champion, Mick Fanning (Gold Coast, Qld, AUS), also has a mathematical chance, but must win the event and prey both Parkinson and Slater are eliminated in their first heat (Round 3).

Kieren Perrow (AUS), 35, defending Billabong Pipe Masters Champion, got the best of a hard-fought heat against dangerous Pipeline specialist Evan Valiere (HAW), 29, on the opening heat of the day, keeping his hopes of a repeat victory alive.

"That felt like a final," Perrow said. "I was expecting Evan (Valiere) to pull off some bombs. He's an unreal surfer out here. We were out of position on those sets, but I'm glad we were and he wasn't in position. It was a nerve-wracking heat being in the first one of the event and I'm just glad to get the win."

Perrow got off to a tough start to his campaign, only finding a series of small scores and a broken board early on. The veteran rebounded however, finding tubes at both Pipeline and Backdoor in the back half of the heat to secure the win.

"My boards are both 6'2" but I'm bummed I broke the first one," Perrow said. "It was shaped to be more like a 6'6". This other one was a little small. I kind of free fell in to a few and I'm glad to get a couple of scores. I didn't have anything before that."

"That was fun.," Nicol said. "To be honest, it's a little weird with the overlapping heats. It turned on out there and a few bombs came through. I got smoked a couple of times, we had everything. That view never gets old. I was pretty scared at the time and trying to not thing about that lip coming down on my head. I'm stoked to get through that heat."

"I just paddled out and knew since the first heat had priority that I wanted to move around and get as many waves as possible. That was my game-plan and it started out really well. I was stoked to get a really good start and I hope it happens every time."

Chapman opted for a slightly larger board than most of his competitors and feels his more buoyant equipment helps not only with paddling, but navigating through foamy barrels.

"Riding a big board isn't always about catching the wave. Sometimes when you're in the barrel the foam-ball will explode out in front of you and a big board will help you ride out over it. It's working. I'm just stoked to be surfing in the contest. It's a dream and I'm psyching no matter what."

Shane Dorian (HAW), 40, former ASP WCT competitor and big-wave specialist, was deadly in his Round 1 bout, notching the day's highest single-wave score of 9.17 out of 10 for a deep backdoor barrel.

"I always start off with a plan, but sometimes it doesn't materialize," Dorian said. "I try my best and hopefully get a few nuggets. The conditions were tricky with lots of bumps. I was happy to get that 9 and after that I was just playing defense. I broke my old faithful, I was bummed about that, but I just got spanked out there. It's all good though, that's what they're for."

"I guess the thing that stuck out most in my mind in that heat was my wipeout," Zietz said. "The thing just mowed me down. I found a couple of open ones in the end, so thank you Pipeline. I'm honored to put my names up there with the other guys that have won Haleiwa. I've never done well at Sunset, so making the final was a dream come true. I need to make a few more heats at Pipe and we'll see what happens."

Event organizers will reconvene tomorrow morning at 6:30am to assess conditions for a possible 8am start.